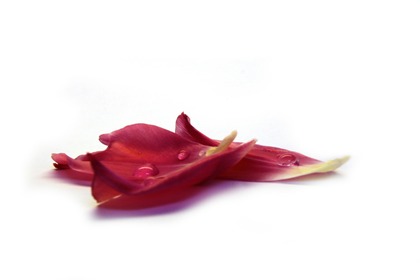 I was home alone, so the first rustle I heard caught me off guard. No matter; there are always a few random sounds. Then I heard it again, almost like a light pitter-patter. I got up and surveyed my surroundings. Was it an animal? A small creature in my space?? I couldn’t see any evidence, so I sat myself back down to work. But a few beats later, I once again heard the sound—more like a light whisper, as if an object was trying to communicate. My eyes darted about the room, but I was decidedly alone. As you can imagine, I was more than a little intrigued and unsettled. I tried to concentrate on my work, but in truth, I was waiting for the next sound. This time I caught it. Just as I heard the now familiar rustle, I looked up to see a petal-less vase of tulips. Scattered on the floor were white petals, and as I watched the last two fall, I heard that familiar echo of a sound. I had discovered the source.

Lying about on the floor was the evidence of each previous mysterious rustle: tulip petals strewn about and empty stems in a vase. I smiled at my discovery. While my imagination had wandered (admittedly catastrophized), shedding tulips was far from my list of possibilities. But there they were, nudging me to notice that even in the small details there is power. Each detachment let out a barely perceptible sound, and yet I was riveted. Those tulips were calling my attention, begging that I notice the tiny shifts.

It’s not just tulips that call to us in whispers. We tend to look for large effects and grand gestures; we confuse greatness with volume of message or number of likes. But true greatness is coursing beneath the surface. Barely perceptible changes are the genesis of our growth. The moments we mistake for mundane, how we conduct ourselves in our homes, a whispered prayer or a tiny tweak in our routine can create large effects. We just don’t always notice them because they are concealed—hidden in plain sight. And then there are tulip moments—times we find those petal-less stems reminding us that growth is concealed and that greatness is often beyond our perception, but it doesn’t mean they’re not there. They just require us to listen more deeply, look more intently and stay committed to our path.

I got up and collected what remained of my flowers. I thanked G-d for sending me another reminder. I had been wondering what to write about this week. There were no glaring events or dramatic tales to report. And therein was the message.