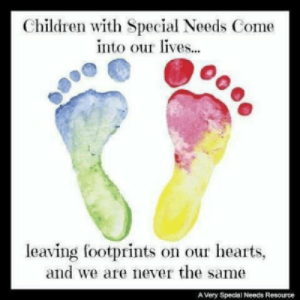 If someone were to ask me if my ten year old son is special needs, I would proudly say that he is definitely special. He is special—not because he is above anyone else intellectually, or because I think he’s better than anyone else since he’s my son, but because the things that he does, most other children—those defined as “normal”—don’t do. He has to work harder than others, because the life that comes easy for us doesn’t come easy for him. When he does something, he does it—not necessarily because that’s the proper way to do it, but because that may be what his heart feels is right.

My daughter, who is fifteen months younger than him, may get in trouble for something she did to him, and yet he’ll plead with me not to punish her, saying that it’s okay what she did, even though he is crying from what she did to him. That’s special.

My son may take ice pops when he’s not allowed to, but he gives them out to all the kids around him. That’s special.

I may start crying because I’m overwhelmed, and he’ll plead with me to stop crying, telling me that everything will be okay. That’s special.

When he comes into my room as soon as he hears my two year old son wake up, and offers him something to eat or drink, that’s special.

When he wants a drink, he’ll take out a cup and 2 straws, so he can share the cup with his two year old brother. That’s special.

Whether they have Autism, Down syndrome, or any other disability, special needs children have such a special personality. When you meet a person with Down syndrome, they will give you such a warm greeting, possibly with a hug. My son gets so excited when he sees new people. He’ll walk up to them and start drilling them. I have seen such heartwarming reactions from some adults when confronted by him. He asks them their name and they tell him. Then, when they ask him for his name in return, his whole face lights up.

As the doors of my son’s after-school program open, I’m greeted by 2 wonderful boys (and the program director)—one with Down syndrome who works in the office (he proudly told me that he does so much work that he gets paid), and the other boy who acts like the welcome committee. The smiles they give and the warmth that you feel—I leave there every time with a smile on my face.

I started working with “special needs” kids when I was a teenager. Ever since I began working with them, my love and perception of them has totally changed. It changed to the point that when I was faced with the fact that my son, too, was like one of them, I didn’t crumple up and tell myself that now I have to hide myself and my son in a corner so no one can see him. Yes, I had to—and still have to—acknowledge the fact that my son is not like all the other kids, that he has these weird things that make him stand out, but I can look at other people in the eye and tell them that my son is special. I can go over to kids who are bullying him, or who don’t want to play with him because he’s “weird”, and explain to them that it’s not fair to treat him differently—he doesn’t understand that he’s different.

Yes, some kids can be bullies because they don’t understand, but then there are those who have such pure hearts. I will never forget how these two young boys—brothers, the older probably not older than 8 or 10—asked my son to play with them. When the older boy saw that my son didn’t know how to play the game, and that he just wasn’t understanding it, he told his younger brother that he should pretend that he didn’t see my son so my son could run to base. I almost cried. I went over to the grandmother who was watching them and told her to tell her daughter-in-law that she was really special. These boys were so young, and yet they understood that all my son needed was a bit of help. Whenever I feel down because kids say mean things to my son, I think about these boys. When I take my son to my in-laws, the neighbors beg their mother to have my son come play—they recognize him for who he is, not the fact that he’s “different”.

When I was first asked to write this piece, I had a hard time coming up with the necessary amount of words for this article. But then, as I was wrapping up the article, my daughter—the one who doesn’t have special needs—came up in my mind. She, too, gets bullied because of the special needs factor. Not because she has special needs, c”v, but because she is a sibling. She is afraid to walk down the street to play with the neighbors, out of fear that the neighborhood boys will mock my son and lay it out on her. She tries to ignore them, but at eight and a half, it’s hard. She said that one of the boys even tried to trip her. It’s not easy having a sibling with special needs. When her friends come over, it’s very uncomfortable for her because of the way my son acts. He doesn’t act wacky out of malice or to be annoying; that’s just how he behaves, and there’s no point in me trying to stop him from doing it. He doesn’t get it. He just wants someone to play with. She doesn’t like being at home because of him.

So, when you hear my son scream, he’s probably excited—don’t get angry at him for that. Share in his excitement.

When you hear him growl, he’s probably frustrated and can’t express himself—don’t yell at him. Find out what’s bothering him.

When you hear my son getting all mad at no one in particular, he probably hurt himself—don’t tell him to pull himself together. See where he hurt himself.

And the next time you see a special needs child, don’t ignore him. Say hello with a smile on your face, even if it’s forced. I guarantee you’ll move on with a smile. These kids are real. They don’t have their own agenda. They are love. And if you see them with a family member, smile at the family member as well. You never know what type of day that family member has been through. Dealing with special needs isn’t easy, but by showing that you care, that’s the first step to helping to deal with it.