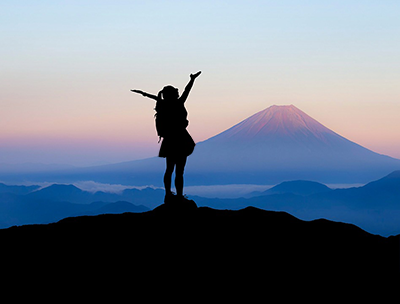 “Are you crazy?  Shidduchim are hard enough as it is for you!  Stop writing these posts about your problems!”

These are just some of the comments I got from well-meaning people when I started sharing my shidduch and life struggles on Instagram. On the flip side of that, I also started getting messages like, “Thank you for giving me hope. Thank you for showing me that I am not alone.”

This is my favorite message. Knowing that I have helped one person feel less alone in our big, scary world makes it all worth it. Because I remember what it is like to be struggling and feel alone, like no one could possibly understand me. It has been years, but I remember that time as if it just happened.

I had gotten a call from a friend—“Milka, go on Facebook to this person’s account, and look for your picture.” The second I saw the comments, I wanted to disappear. There I was, standing in the front lawn of my school, looking in my Chanel compact, putting on lipstick. The comments ranged from, “Does she think looking in the mirror will change how she looks? Nothing can help. She should just kill herself now and make the world a more beautiful place.”

Those girls did not know that I was still struggling with the after-effects of being hit by a car a few years before. As a child, I had been fearless and confident, but life had thrown me some curveballs—namely, two scars on my hands from my accident. While everyone tried to reassure me and tell me that I should be happy all my other injuries healed, all I could think was, How I am ever going to be an actress now?  I have scars, and actors have to be physically perfect.  I had known my whole life that I wanted to act, in order to inspire other little Jewish girls like me and show them that we are also talented and can share those talents—just like everyone else. The comments that the Facebook post received made me want to go into hiding, though—and get out of the spotlight.

All I could think was, Hashem, why me? What did I do? Is it not enough that I am an only child and have no siblings to stick up for me in school? Being hit by a car twice in the same year was not enough? I felt like Hashem—and the world—was punishing me, and maybe those girls were right—I did not deserve to exist.

I went to my principal and teachers, and they said they felt bad, but could not really do anything besides make the girls apologize to me, since this had happened after school. Even though the girls apologized near the principal, the bullying still continued during lunch when no one was around. Despite me asking them multiple times to stop calling me “Milk”, they refused to stop. The bullying got so bad that I ended up deciding I had to get out. I took the regents early with some classes and graduated as a junior—just to get away from the people who made me feel like I was not good enough to exist. My principal, who had originally promised me my diploma, then told me I wouldn’t get it until my whole class graduated, in order to not encourage other girls to leave school early, as the school didn’t want to lost more tuition.

The year after I left, I couldn’t go to college, so I started spending my days at home, away from everyone. I went from the “perfect” shidduch size to being told that no guy wants to marry the fat girl, so I would have to lose weight if I wanted a chance in shidduchim. That triggered me and made me think that maybe those girls were right; I do not deserve to live—I’m not pretty enough.

While I was home for the year, I became obsessed with the show 90210 and anything related to Los Angeles. I knew I had to make it out there somehow and keep my childhood dream going, to prove that I did deserve to live. I was going to do it for all the other girls who felt like they had no voice, who were told they were not worthy.

The moment I got off the plane, I felt a peace I hadn’t in awhile. No one knew me; I could be anything and anyone. Then a cousin of mine got married, and I came back to New York City a new thinner, sun-kissed version of myself. All of a sudden, I was a catch—the girl who had gone to LA and transformed herself. I started dating, but something was missing—none of the guys I went out with could relate to the emotional pain I had been through.

Around this time, a friend sent me a link to a Torah Anytime class.  She didn’t know how much she would change my life. I clicked on it. I didn’t like the speaker, but the one right after the video she sent me caught my attention. Rabbi Stauber was a dynamo who was talking about dating and the power of communication. Till this day, I thank Hashem for Rabbi Stauber agreeing to take me on as a therapy client. I remember him being the first person to realize I wasn’t getting married simply because I didn’t know how to connect to people. I was so hurt that I was afraid of letting people in, so I came off as standoffish on dates, when in reality, I am a person who likes to speak to anyone and everyone.

During one session, we talked about looking at things from different perspectives. He made me watch Meir Kay’s video with the golf balls. It taught me that you can look at life as a jar full of golf balls with no extra room, or you can look at it like a jar of golf balls that still has room in it for life to flow through (in this video, life was represented by sand). Rabbi Stauber told me that I can either let the bullies get to me and make me feel like I am stuck in life, or I could look at my life as the jar which has so much potential  for what I can still do. I liked the concept he was presenting, but all I could think about was that there was no way Meir Kay could relate to me and my life’s struggles—he is Mr. Sunshine, with a perfect life.

Then, about two months ago, Meir Kay published a video with his life story and his struggle with feeling alone. It was then that it hit me—we never know what someone is really going through. Here was Mr. Sunshine himself saying he struggled to get up sometimes and that he felt anxious…In that moment, I realized—Rabbi Stauber is right! If I ever want to make my dream come true, I cannot let my childhood bullies stop me. Sure, we all have our struggles—even the people who look like they have it all together. My job now is to look at what happened to me from another perspective. Why not share my story? Why not try to help others? Be it girls in shidduchim, or girls who are feeling alone or like no one understands them.

It took me years to realize that yes, I want to be an actress, but the reason I want to be one is because I want to inspire another little girl and make her smile the same way all those actors had inspired me and made me smile when I was alone. I now recognize that my goal is still to have my own show—maybe even a talk show!—but you don’t need a big audience to inspire the world. All it takes is reaching out to one person and seeing if they are okay. If just one person had reached out to me during those dark times, it would not have taken me so long to get to the place where I am now. Just because someone looks like they have it all together does not mean that they do. Now, my goal is showing others it’s okay to be you! We all deserve to live, no matter what we look like. Because Hashem created us all, and we each have a purpose.