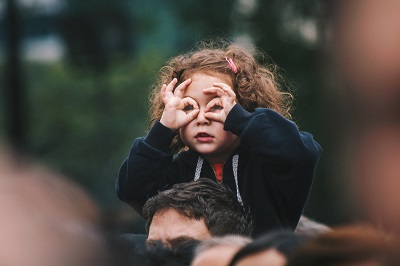 I once went to an indoor playground with my youngest child when she was around two and a half. She was always an active kid, jumping and climbing on everything in sight. Not only that, she wasn’t afraid of anything, valued her own opinion over any other, and marched to the beat of her own drummer. Indoor playgrounds were a great place for me to allow her to indulge in her Evil Knievel inclinations in relative safety.

This particular time, she was being extra precocious; climbing, jumping, and sassing like a kid at least three times her age. As I watched her swinging from the Tarzan ropes, giggling with glee, I knew that getting her to leave in 5 minutes, like we needed to, wasn’t going to end well. Sure enough, when I called her over, she decided to run back up into the play structure and announce to anyone who would listen that she wasn’t coming home with me and planned to live out the rest of her days there.

As I tried to coax her down, one of the other mothers there looked at me sympathetically, chuckled and said, “There’s one like that in every family.” Appreciating her sincere gesture and comradery, I chuckled myself and responded, “Funny; in my family, there are five!”

My husband and I have been blessed with five kids, each a world unto themselves and with such different qualities, strengths, and challenges. As a young mother, I envisioned parenting in a certain way. More than that, I envisioned my children in a certain way. In the past 17 years, I’ve had both of those visions blown to bits, and I’m trying to put the pieces back together in a different way now. A way that accounts for my humanity and my children’s individuality.

I don’t have everything all figured out; oh no, I am far from the cover model of “Today’s Parent”. However, there are a few theories I am testing that seem to make sense. For example, fair and equal are absolutely not the same thing, and my kids need to learn that. Fair is that each child gets what he or she needs, thus my seven-year-old (who thinks she’s actually 18) needs to have an earlier bedtime than her teenage siblings, even though she feels like it’s the highest form of injustice in the world. “It’s not fair!” she insists, but what she’s really seeing is that it’s not equal. Unfair would be letting her stay up until midnight and denying her growing body the sleep it needs to be healthy. Such is life, kid. Learn it now—Hashem doesn’t give us what we think we deserve; He gives us what we need to serve. Not always equal, but always fair.

I have also come to realize that it’s okay for my family to look a little messy from the outside. (While I’m not talking about their clothes per se, I also have to remind myself that as long as I have provided them with clean, properly-fitting clothes, what they actually choose to wear is an expression—and reflection—of them, not me.) I currently have 2 kids in two different high schools, and a third one who will be attending yet another one next year, Be”H. Each school has its own hashkafa, because each of my kids is different. While one child is making his way through the non-frum, Hebrew Academy, another is doing quite well in a Bais Yaakov-type environment, and the third is set to attend a B’nei Akiva girls’ school after graduating the Agudah-style school she and her two younger siblings currently attend.

My husband and I have done everything we can to lay the groundwork for our kids in terms of values and hashkafa, and yet, none of our teenagers are the same in their thoughts and feelings toward Yiddishkeit. It may look to the outside world that we really don’t have our stuff together as a family, and I’m not even going to deny that that may be true in some ways, but I can’t let the outside world’s perception of my family pressure me into putting my kid into a school that he or she won’t fit into or learn and grow in.

I sound resolute in this now, but there are times when I don’t feel it. There are moments I’m afraid of being judged, and secretly wish my kids were all cookie-cutter, rule-abiding, easy-to-raise children. Life would be a whole lot simpler if they all just believed what I do in the way that I do. But then I realize that I’m looking for things to be equal and not fair. Each of them is on his or her own path, traveling his or her own journey. While it’s my job to give them a map, it’s also my job to step back and allow them to navigate where their path leads. I’ve written some notes on the map, circled some great spots I think they should stop and see, pointed out what I think are the best places to get gas, food, and lodging, but now I have to wait to see if they ask for directions. And if they don’t? I need to love them anyway.

Parenting is a lot harder than I thought it would be when we first started. I look back at that monkey of a two-and-a-half-year-old who decided she was going to live in an indoor playground, and I think about how much easier it was to handle that than it is to deal with some of the bigger issues I face with my teens now. What makes it even more challenging is that each child has different needs; what is right for him or her as an individual may not be what was right for an older brother or sister, or what seems right for the family in general.

If I can remember that “equal isn’t always fair” also applies to parenting, and that it is my job to try to provide each child with what he or she uniquely needs to serve, to learn, and to grow, maybe this parenting thing will get a little easier.