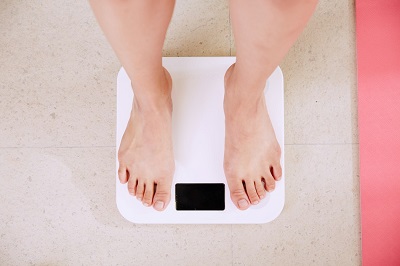 It is strange being on this side of the scale again. While it was here that I was raised, grew up and knew until the birth of my first child…it is not a place I have assumed for a very long time. I’m talking about being part of the exclusive thin group. And even as I write that, I wonder if I truly am once again a welcome part of it, or if I am just fooling myself. But that is for another piece…

I wasn’t one of those girls who grew up always struggling with my weight. Rather, I was one of the fortunate few who was born with great genes, who ate whenever, whatever and however much I pleased and simply never gained.

Pregnancy changed all of that. And six pregnancies later, I had absolutely managed to transform what was once a thin body into one that was quite the opposite for many years to come. While I am thrilled that I have four beautiful, healthy children to show for it, my pregnancies were far from easy. And being that I wrote six pregnancies and four children, you can deduce that tragically, two of them did not make it into this world.

Ironically, during the time I struggled to carry a healthy pregnancy, others would look jealously at my flat stomach. I, meanwhile, craved nothing in the world more than gaining weight and having that big belly. Skinny meant I wasn’t pregnant. It was not something to be admired, but something that was crushing. It was not a compliment but what felt like a curse.

And then everything shifted. When I was pregnant and able to carry my babies, I ate because I wanted to. I needed to. And my babies needed me to. But nothing would satiate me. So I kept eating and eating.

When I kept on that extra weight post-birth, I watched the way the world changed how it interacted with me. It was cute for a skinny girl to eat a huge plate of food. Not so much for a heavier girl. I knew things were bad when I actually faked being pregnant so that people would treat me kindly and not just lump me with the rest of the overweight section of society.

I kid you not. For our 10th anniversary, my husband and I went on a vacation to a beautiful island. I remember heading to the airport in my Spanx, thinking I looked fine until I caught a reflection of myself, and no matter how hard I tried to suck in, that belly wasn’t going anywhere.

So off went the Spanx, and instead, I pushed out my stomach a bit more, kept one hand on my back and another on my stomach. Immediate transformation! I was no longer overweight but adorably pregnant, looking somewhere around my 5th or 6th month. When people looked, they smiled and oohed and aahed as it looked to them like my stomach had a purpose and was important—and not just the result of perceived lack of self-control.

But the point of this piece is actually the opposite. There is no question that society is not too nice to those deemed overweight. But here is the catch: society is also not too nice to those who are actually in shape and at a healthy weight. To fit right in, you need to battle with your weight and be able to relate to those overweight (but not too overweight, of course). And skinny people can’t. They don’t know anything. They have no idea what it means to struggle. They can’t be deep or insightful, and they clearly have nothing to add to any meaningful conversation. After all, skinny people have it easy, with everything just handed to them and going their way.

Yet, the same society that looks down on the thin, in many ways, both directly and indirectly, causes the body image crisis from which we all suffer. We now have teenage daughters. I watch as adults, who should know better, comment on how thin my girls are. “Wow, look at you, so tall and skinny! How gorgeous!” Well, guess what…tall and skinny may seem gorgeous, but when dealing with a teenager, it comes at a high price. Tell a young woman that she is beautiful when she is under 100 lbs. and see just how willing she will be to watch that scale tip. Remind her of how thin she is every time you see her, and she will do anything in her power to remain that way. But even then she can’t win, because if she remains tall, skinny and gorgeous, she will still be resented by the rest of society.

As a Chassidic Jew, I follow the laws of modesty. Externally, this means that I wear skirts that cover my knees and shirts that cover my elbows and collarbone. Furthermore, I ensure that nothing is too form-fitting, as the point is that we do not want to draw our attention to body parts. But there is a much deeper level to modesty that I hadn’t really tapped into before this process—modesty is something that we should both create for ourselves and project onto others. We are so much more than just our physical bodies. And the goal is that when we look at a person, we not only refrain from judging him or her by what we see, but that we recognize there is an entire package of the physical, the spiritual and the emotional that is contained in the body and the soul. When we allow ourselves to truly embrace the inner dimension of modesty, we wouldn’t judge a body type, as we really shouldn’t even be focused on it.

Unfortunately, we rarely tap into this level. But the first step in getting there is to stop shaming others. And to recognize that skinny-shaming is as damaging and problematic as fat-shaming. Shaming is shaming. It is wrong, unhealthy and dangerous. We have no idea when we see a body what the story is behind it. We could be looking at a woman who spent years working and overcoming issues to get that fit or one who was naturally born with those genes. We could be looking at a thin woman who is unable to conceive so her body never went through the changes that pregnancy creates. Or we could be looking at a body that tortures itself every day, either through starvation or binging, to keep a number on the scale that others will both admire and simultaneously resent.

We need to assume that we can’t assume anything. And we need to support each other regardless of the number on the scale. So please, let’s try to stop judging each other and recognize that we all have a story, we all have struggles, and we all have insecurities, regardless of our body types. And ideally, we will one day reach the level where we don’t notice or distinguish if one is heavy or thin, since it won’t even be something we feel the need to notice.

A version of this article was originally published on Interinclusion.org.