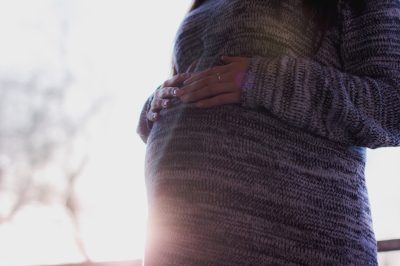 Hyperemesis gravidarum (HG) is a pregnancy complication that is characterized by severe nausea, excessive vomiting, weight loss, and dehydration. About 2% of all pregnancies worldwide suffer from HG. Many recognize it because Princess Kate had this condition. But most people don’t realize how common it actually is.

When I was 2 weeks pregnant, I went in for a blood test to confirm my pregnancy. I threw up all over the nurse and had my answer. By 5 weeks, I had tried Diclegis and Zofran to curb the nausea, but I still continued to feel terribly sick.

That same week, I threw up the entire two blocks home from work. When I got home, I proceeded to call my doctor, asking what I should do next. (And then I had to clean out my car.) My neighbor came out and asked if she could take me to the hospital, as she was concerned about how I looked. My doctor returned my call a half hour later and told me to go to the emergency room. I remember the doctor initially telling me that what I was feeling couldn’t be morning sickness, because I was not yet 6 weeks pregnant. He was right; it wasn’t morning sickness.

It took three ER visits for the doctors to diagnose me. All throughout this time, my OBGYN denied it, saying I had extra weight to lose, even as I was losing 35 pounds in my first trimester. I remember switching to maternity skirts, because any skirt with a waist made me sick, and the belly band gave me so much comfort. I also remember putting on maternity tops, hoping that I would look pregnant as I continued to lose weight.

At my second ER visit, as the nurse was struggling to get an IV started, he said, “I remember once having a stomach bug and needing fluids.” And I cried, thinking, ‘You have no idea—this is not a stomach bug and has now been going on for 6 weeks!’

On Erev Pesach, I called my Rav in a panic. The only thing that I could keep down was raspberry Snapple, and I was concerned that it was not Kosher L’Pesach (KLP). He told me I must drink grape juice, even just a shot glass worth, for the sedarim. I don’t think he understood how sick I was. I made it through the second kos and washed for motzei matza before I got sick all over my seder table. The next afternoon, I went to the ER and needed five bags of fluids before I could be safely sent home. They kept me there for twelve hours! I was discharged only after I could eat/drink something and keep it down. With the IV fluids and anti-nausea medicine, I kept down cranberry juice. I was so excited that when I got home, I sent my husband out to buy some. I was totally oblivious, and realized only after, that I had drunk non-KLP juice in the hospital, which had corn syrup in it, and at home, the KLP juice had only sugar. I was very sick again.

The first day of Chol Hamoed, I went to my OBGYN as a follow up to the ER visit, and because I had been so sick. She sent me back to the ER and had me admitted, planning to give me a feeding tube.

When I got to the ER, I was initially assigned the same doctor that I had seen 36 hours before. He refused to treat me, and called in his supervisor, who then called the on-call OBGYN. The OBGYN decided that I didn’t need a feeding tube. She kept me for three days for IV fluids and anti-nausea medicine, and then sent me home again. My former employer and boarder mom invited us for the second days when she heard what happened. We were supposed to have gone to her for the second seder, but my husband and sister had ended up going without me since I was in the hospital. (She is a midwife, and at 35 weeks, I switched over to her.)

The pregnancy was long. On a good day, I threw up 10-15 times. I lay around, nauseous. I don’t know how I kept my job as a nanny because I barely kept the kids alive. My boss during the first trimester was very sympathetic, because she too had had HG. My boss during my second trimester was also very understanding, because she remembered having watched her mom go through HG as well.

At 29 weeks, we decided to go to Brooklyn for my first nephew’s Bar Mitzvah. I am the only one married on my side, and my husband has one sister with 8 children k”h. It was her firstborn’s bar mitzvah and I stubbornly wasn’t going to miss it. Unfortunately, Friday afternoon, I got very sick and ended up needing Hatzalah to take me to the nearest ER. This time, I was taken from the ER to Labor and Delivery. Once there, I told them what was wrong. But being a busy Brooklyn hospital, I was pushed aside. I had to wait 6 hours to be triaged! By then, I was in preterm labor from dehydration. Baruch Hashem, after a few bags of IV fluids, the contractions stopped. We missed the Friday night dinner, but were able to make it to hear my nephew lein, and to enjoy the kiddush and the rest of Shabbos.

Twice more after this incident, I went into preterm labor from dehydration. I had almost gotten used to it, as if it was normal.

At 34 weeks, I was about an hour away from home, in Silver Spring, MD, visiting a friend. On my way, I passed out from dehydration and rear-ended someone. Everyone was okay, but the stress of it caused preterm labor again. I ended up in the Maternal Fetal Medicine Unit, out of town, with our only car, so my husband couldn’t get to me. I remember the doctor walking in and explaining different ways that they would try to stop the labor. I begged them not to. I cried that I was done being pregnant. They called in a social worker to explain to me that I didn’t want an early baby. But I just didn’t want to throw up anymore. After 3 days, the contractions slowed down enough, and I came home just in time to spend Rosh Hashana in Cleveland with family. After Yom Tov, I switched from my OBGYN to my midwife. I felt that the OBGYN wasn’t taking how I felt seriously.

From 36 weeks on, I was magically able to keep down a few sips of Evian water, and I began to gain weight. I don’t know if I ever truly gained much back because I insisted on keeping my shoes on, and my wallet, keys, and phone in my pocket when I got on the scale. I just needed to see the numbers go up. I sort of gained back 10 of the lost 35 pounds.

At 39 weeks and 5 days, I decided that I was not going overdue. Even though this was my first, and everyone said I would. My doula suggested that I go to labor-inducing acupuncture. And all laughs aside, it worked. Two hours later, my contractions began, and about 4 hours later, I lost my bloody show. A few hours after that, at 7.5 cm, and in transition, we went to the hospital. It wasn’t long before I gave birth to my princess. The moment my placenta came out, I was asking for chicken. The day I came home, I was 35 pounds below my pre-pregnancy weight, and I didn’t own clothes that fit, because I was significantly smaller. I remember trying to get creative so I could go to shul on Friday to respond to Kaddish, Kedusha, and Barchu. We ended up joining for Mincha, Kabbalat Shabbat, and Maariv. As the men danced to Lecha Dodi, I stood there with my newborn, crying tears of thankfulness to Hashem.

Hyperemesis Gravidarum is an illness. It is not a symptom of pregnancy. It is not bad morning sickness. It is debilitating. Many women end up needing feeding tubes and/or PICC (peripherally inserted central catheter) lines. And some are forced to terminate. It is not just regular weight loss, but a loss of more than 15% of your total body weight. For some, it goes away around 20 weeks, and for some, it stays through delivery.

This disease is not just physically taxing, it is also emotionally taxing. Some women are so scared, that they have their tubes tied to make sure they can’t get pregnant again. I remember once posting on a Facebook group that I was sitting on my couch crying how I wanted another baby but was terrified of having HG again. One woman responded saying, “I have HG. My toddler watches Netflix all day and brings me a shmattah when I get sick.” I thought in that moment, that while I dream of more, my princess is enough. I can’t put my selfish desire of a bigger family before her care. Maybe one day, once she is in school (and doesn’t need me all day), and she is potty trained (so she can sleep by friends while I am in the ER), we will revisit the idea of adding to our family.

There is help. There are wonderful informative websites. There are so many Facebook groups, even a frum one. There are also so many super amazing doctors and midwives. If yours isn’t listening to you, switch! It’s really that simple. There are also medications and treatment options.

The best and worst part of the whole experience was that my best friend got pregnant 3 weeks after me, and she also had HG. So we were pregnant and sick together, and had each other to lean on for support. If you are pregnant and have HG, you are not alone. And please feel free to reach out to me!