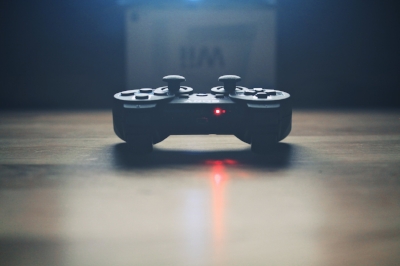 You can buy it as a mug, a bumper sticker, a t-shirt, or even a mouse pad: “Video games ruined my life.  Good thing I have two more…”

It’s no joke.  As games have gotten more realistic, fierce debates have broken out about how that realism affects us, for instance, when it comes to violence we see (and sometimes carry out ourselves) in games.

Over the last decade, philosophers, psychologists, humanities scholars, and others have also been trying to decide what it means that video games let us live and die over and over again on the small screen.  One artist, for example, released a video in which he “committed suicide” in over 50 first-person and third-person shooter games.

Most video games grew up around a model where life is essentially cheap.  You put in a quarter and you get three or five lives, and when they’re over, you can have as many more as you want – at least, until you run out of quarters.  Life is cheap and death doesn’t matter.

Obviously, this runs counter to everything we hold true in our real lives.  As a Jew, I know the Torah tells us to “choose life,” and that in Jewish law, saving a life even comes ahead of observing Shabbat, Yom Kippur, or almost any other mitzvot.  But we don’t get too worked up at this “devaluation of death,” as one paper refers to it.  Most of us would probably say, “It’s just a game. Don’t take it so seriously.” However, I’ve noticed something when I play games—which, by the way, more and more of us are doing.

With the rise of “casual games”—games you can download and play quickly for free, using a very simple game-play model, like swapping gems or Tetris-type games—today’s gamers are no longer just men, ages 18-35, but males and females, ranging from 12 and below to 80 and up.  So they may be “only games,” but they’re a much bigger part of our lives than ever before.

So, what have I noticed?  When I’m playing my latest addictive game, I’ll use up four of my five lives in just a few minutes, but that last life… that’s very often the one where I finally break through that really tough level, that impossible puzzle, that final challenge to reach the victory I was unable to attain in those first four lives.  That last life seems to be the one where I’m under pressure make it count—or else.

There’s something about that last life that makes me play better, play harder, play to win, because it’s do or die.

In other words, it’s a lot more like real life.

Permadeath games make “defeat, failure and death irrevocable” with the ultimate message that mistakes have consequences.  And I’m betting that when players know that any mistake is going to have major consequences, they bring their best selves to the game.  Like me on my last life, they probably play better, play harder, play to win, rather than just fiddling casually around like most of us, knowing they can get more lives if they run out.

There’s an African parable about a dog who spots a cat in the distance and decides he’s pretty hungry.  So he starts chasing the cat.  The cat darts this way and that, and finally escapes the dog.  The dog sighs and shrugs his shoulders: “What can I do?  I was running for my lunch, but she was running for her life.”

All of this makes me wonder: video games aren’t real life, after all, but they are very much like real life.  How many of us are living our real lives as if they were our last?  How many of us are, like that cat, truly running for our lives?  I’d bet that most of us aren’t, because days, like lives in video games, seem truly endless.  If one doesn’t go well, lie down, close your eyes, and you’ll have very many more of them.

Except that isn’t how life works, and you will never have the chance to live this particular day again.

That doesn’t have to be depressing.  As video game creators have discovered, there’s a “thrill, adrenaline rush, tension and excitation often associated with permadeath.”  Knowing you’re on your last life makes every single action far more significant, far more meaningful, and yes, far more exciting, than if it was just one more life, or one more day, in an endless infinite series.

And in fact, Judaism has long recognized this truth.  Rabbi Nachman of Breslov said, “The Architect of the world never does the same thing twice. Every day is an entirely new creation.”  We’re living our last lives, and those lives are made up a very finite number of days; each day is precious and unique.

This means that, just like in a video game, we have a limited number of opportunities to move through the world accumulating “points”—in this case, mitzvot.  Today we’re living our last today, and once it ends, we’ll never get it back.

We’re on our last lives, and it’s up to us to make them count.