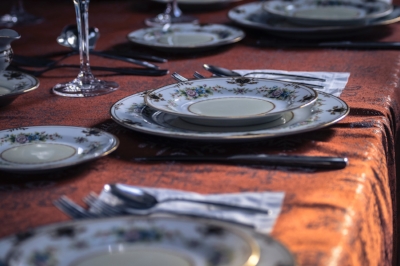 For most children of Holocaust survivors, the lack of extended family connections, and even the lack of family information, is an agonizing common factor. Being the daughter of a child survivor, I am not immune to the deep-seeded pain of having very little extended family.

My mother was three years old when her family managed to escape France, by being smuggled into Switzerland during the Holocaust. Some years after the war, when my mother was ten, she and her immediate family emigrated from Belgium to America, leaving behind a small group of extended relatives, who eventually scattered themselves to Canada and Australia. Only very few remained in Belgium.

Sadly, the Holocaust emotionally affected my mother’s immediate family so severely that they were not close while she was growing up. By the time I was born, I had very little connection to the few aunts, uncles and cousins that I did have in America.

When my husband and I were making our first daughter a Bas Mitzvah party, it pained me that only three people (outside of my husband and our three daughters) were actually my family members. While it’s true that I am blessed with so many friends, the little girl inside of me was crying out for family connections. I needed something that I had never had, and the pain and resentment of that caused me tremendous anguish.

Searching for strength, I contacted my only known frum relative, fellow writer and first cousin once removed, Rosally Saltsman. Fortunately, although she lives in Israel, we stay in touch via the Internet, and I am glad to say that her friendship has been such a gift! Over countless emails that were sent back and forth, she enclosed to me some much-needed chizuk. The result of that immense strength rekindled my passion for Torah and helped me to reach out to the only other extended family I have in Chicago. I bravely sent an invitation to my mother’s brother’s wife. After having virtually no relationship with my aunt, she must have found it strange to be invited to something so out of the blue. I can’t even imagine what she must have been thinking when they received the invitation, but I was happily surprised when she replied that she’d be glad to attend.

I think the best result of the invitation happened after the Bas Mitzvah celebration. My aunt and uncle live, interestingly enough, in the same area of Chicago that I do. Since they live within walking distance from me, I decided to invite them for a Rosh Hashanah meal and they accepted. I have to admit that right after they arrived, it was a bit awkward. Not only have we been out of touch since I was a little girl, but I am now religious, and it might have taken a little getting used to at first. Nevertheless, by the time we ate the meal, we were all talking and sharing like old friends—like family. It felt good.

In the middle of the meal, my uncle (who was seven-years-old when the Holocaust began) started to cry in deep, wrenching gulps.

My aunt was horrified and embarrassed. She tried to stop him, but I interrupted her. It felt right to simply say, “We’re family—let him cry. I am sure if he’s crying this hard, he must need to. Don’t be embarrassed!”

So my aunt, my husband, my children and I waited in the silence that was punctuated by my uncle’s heartbroken sobs.

“My grandfather,” began my uncle, as he attempted to dry the tears that cascaded down his face, “was a very special man. He was very religious. I grew up living in the apartment complex that my grandfather owned. My mother, my father and I had our own apartment, but we would eat with my grandparents. And I remember Shabbos.”

My uncle cried as he told beautiful tales of my great-grandfather, and of the holidays and the Shabbosim that he remembered as a boy. “My mother and her mother would light the Shabbos licht every Friday night. They lit their candles on a dining room table that was covered with a beautiful brocade velvet tablecloth, which had been a wedding gift to my mother and father from my father’s parents.” He halted briefly, and then he continued sadly, “After the war, we came back to our apartment, only to find that our relatives—including my beloved grandfather—had been murdered and our belongings stolen,” my uncle paused, and he began to cry again. I didn’t see him as a man in his early 70’s, but as a young boy whose safe and happy world had been turned into a living nightmare that would haunt him for a lifetime.

“My mother found an aunt that was still alive. Apparently, this aunt had somehow managed to rescue two things from our apartment before everything had been taken. And she gave them to my mother. It was a mantelpiece clock that was wrapped in the Shabbos tablecloth. When I got married, my parents gave them both to me. They are precious antiques that represent what we had before the war murdered and destroyed our family. I had always thought I would give them to one of my children. But my oldest is married to a Catholic girl, and I wouldn’t dare give it to them because they wouldn’t understand what that tablecloth means. My other son is not religious, and he wouldn’t appreciate the sentimental value.”  My uncle paused a moment as he looked pointedly to my husband and me. Then he tapped my table that was decorated with my best Shabbostig finery. “This,” my uncle said, “is the table that the tablecloth belongs on. On here, it will see Shabbos again.”

I received the tablecloth the following Erev Yom Kipper. When I placed it on my table, my children, along with my husband and I, stood running our hands across its rich, plush surface. We thought of the relatives who had once touched it. I thought of my cousin, Rosally. It was her grandparents that had given my grandparents this tablecloth as a wedding gift. It bonded Rosally and me together on a deeper level. I felt as if I had come home. As I ran my hand across its surface, I connected with my relatives who knew the meaning of being Torah Jews. I was finally touching something that they had touched.

My oldest daughter was the first to speak, as we silently absorbed the tablecloth’s energy. With her hands placed reverently on the middle of the tablecloth, she said, “I think it was right here that our great-grandmothers lit their licht.”

I am humbled to say that the velvet tablecloth resides peacefully in my home, anticipating the next Shabbos. My family and I have been given a gift—a peaceful embrace from generations long ago, that seems to cry out approvingly, “On here we will see Shabbos again!”