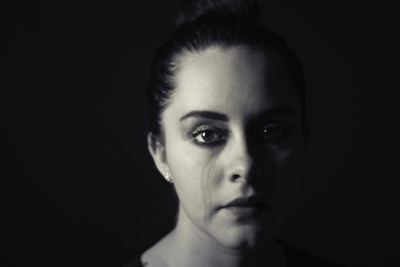 Back when I was a naïve 13 year old, you were my world, my rock, my inspiration.  You were the mother, the father, the sister I never had.  You were my everything.  We spoke about a lot of things.  We spoke deep into the night, often ignoring the time on the clock.  Our conversations were full of you encouraging me.  Telling me I will be fine.  Telling me that I can, and I will, overcome my difficult childhood.  They were filled with deep discussions about G-d, about how good He is, how He loves us so.  “He only gives you what you can handle, Stacy.  He must think you’re very strong,” you said.  You promised me that everything will be good and bright and better once I embrace Him, and that I will live a life of color and brightness from there on in.  You told me to pray; you showed me how to cry into my siddur, as I sat next to you every Rosh Hashana and Yom Kippur, following every word and making sure I knew the place in the Machzur.  I watched you struggle, but you never complained.  Never once did you mention anger, or sadness or loss.  You smiled through it all and remained steadfast.  You showed me what strength and emunah truly was.  I looked to you, 10 years ahead of me, and I thought that my life would unfold just as yours had.  I had no knowledge of the words mental illness, depression, and anxiety.  All I had was the blind faith in your words.  But there were so many things you never said.

You never told me that this would be my last time going to the beach wearing a bathing suit.  You never told me the sun would not touch my body any longer and that my tan lines would include only those areas which I chose to expose: my arms beneath the elbow, my neck, and my legs below the knee.  You never told me that upon my marriage, I would never be able to walk down the beach with my husband, hand-in-hand. That as a mother, I would not be able to go there with my family and get lost in the waves and the sand and the pull of the tide.  That I would have to go alone, and stand out with my shwimkleid, covering all the appropriate areas of my body.

You never said that I would be at bottom of a hierarchy created by the pious and the pure.  That I would become almost invisible because I am a baalas teshuva with nothing to her name.  Never mind the hard steps that I took to get there.  Never mind that I am still walking up a hill.  You never told me that my neighbors would look right through me when they discovered what my background was.  That they would overlook my children and ignore them as if they didn’t exist. You never told me that yichus and money rule in this world that you brought me to.

You never told me about the politics that go on in shuls.  Who would have thought that my very own husband would get kicked off the committee because he was too frum, or too much of a baal teshuva, or not what they were looking for?  You never told me that the “Rav”, who was my age, would come to my house and ask me inappropriate questions about my relationship with my husband.  That he would call me an angry, sad woman.  That I would have to ask him to leave my house.  And never come back.  And then I would have to watch him be praised for all his good work and devotion.  And I would see his family be put up on a pedestal. And be admired.  You never told me how hate and despair over the shul’s decision to keep him as their “Rav” would eat me up alive.  How could this be yiddishkeit?  How could this be right?

And you also never mentioned the fact, that even with my best intentions, children don’t always end up the way I imagined them to be.  That the potential I held in my hands when they were newborns turned out to be so different from what I pictured.  You never told me of the pain I would feel because one of my sons couldn’t read and the other would be learning disabled.  You never told me that children who are different are not as accepted as children who are normal.  That my desire to help them achieve their greatest potential, and my undeniable belief that placing them in the appropriate learning environment, would cost them their friends, their religion, and their being accepted by the community.

You never told me that dyslexics have no place in our society.  That the world that looked so bright and accepting when I was becoming frum, now looks so cold and uninviting.  That my son would be left standing on the outside, looking in.  You never told me the pain that I would feel, and how sharp it would be, when I would so much as look outside my window and see all the “normal” boys playing together and going to shul on Shabbos.  Why didn’t you tell me that I would have to put things under the rug in order to get accepted?  That I would have to conform and deprive my children of what they need in order not to stand out?  You didn’t tell me that not everyone out there is like you, with your big and open heart, and your never-ending love.  You never said a word about judgment and status.

You also never told me that I would be asked to undress in front of stranger once a month when I would be required to go to the mikvah.  You said nothing about the panic I would experience and the inability of the Rabbonim, chashuve people, to do anything to help me.  You never told me that there are no heteirim when it comes to anxiety and mental illness.

You never told me about what it takes to experience a Shabbos when you are already in a depressive state.  Or when you are on a diet.  Or when you are just not in the mood of smiling and cooking up a storm.  What about the inactivity, the inability to accomplish anything in that 25 hour period—the feeling that your children don’t have structure, the feeling that you don’t have the structure that saves you every other day of the week?  What if you can’t rest?  What if you can’t sleep?  What if you count the hours until you are free from the cage of the do-not-dos that come with Shabbos?  What if you feel that you have jumped through enough hoops already, with the kashrus and the tznius and the Yomim Tovim, and you just don’t have the strength for another “no” and another “don’t do”?  What happens when the mitzvohs that are supposed to bring you joy do the opposite?  What happens when mitzvohs just make life more difficult and more unbearable than it already is?

And about G-d—Why didn’t you tell me that He doesn’t always listen to prayers?  That He has devised the evil plan called “mental illness” and makes people suffer with it daily, no matter how hard they pray? Why would He put a person in this world to live, just to have him feel like he is dying every day?  Why would anyone, especially G-d, make a person feel suicidal and give them so much pain that they would eventually take their own life?  Did you not realize you were lying when you said, “G-d only gives you what you can handle”?  Did you not know, maybe, that He in fact does it all the time?  And that there are so many people in this world who can’t handle it all?  Have you ever met somebody in a mental hospital or a rehab center?  Have you seen what G-d has done to them?  You should.  And you should take your words back.  I will never believe them again.

Maybe you didn’t say these things because you so badly wanted me to become frum.  Maybe you too were naïve, thinking that we would be friends forever.  That I would always have you, and that together, we could be unstoppable.  Maybe you never had to question your way of life because it was, in fact, perfect.  Not tainted like mine.  Maybe you thought you were saving me from gehenim.  You thought you were doing a mitzvah.  You thought G-d would for sure give you a good life after you converted a bunch of people to His team.  To your team.  Maybe “I was mekarev her” was something that you so badly wanted to say about me.  Maybe you just so loved being in the giving position.  Maybe it was the giving status that you were after.  Maybe not.  Maybe it was a pure heart and the desire to follow the laws of the Torah, and kiruv is where you found your calling, just like some find their calling working with the severely disabled population.

But I do wish you wouldn’t have sugarcoated it for me when I was so young and making decisions based off of lies.  I do wish you would have at least warned me of the pitfalls of religion.  That you would have showed me a more realistic view of the religious world.  I wish I didn’t have to learn about it on my own, without you by my side to bring the brightness into places where it is very dark.  I so badly wish that we were still friends, in camp, surrounded by the good that yiddishkeit, and life, had to offer.  I wish you could still talk me through this tangle of a life that I now live.  I wish I wasn’t so alone, an adult, and in my own life, just as you are in yours.  I wish it would be easier.  I wish you would have told me the things you never said.

**To reach out to the author of this article, please email rochel@nashimmagazine.com, and write “contact the things you never said” in the subject line. Your message will be forwarded.