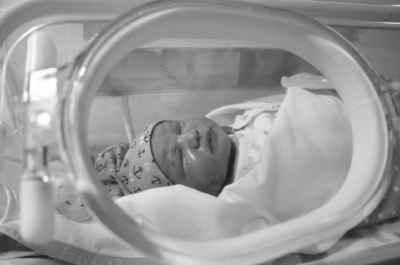 I would like to introduce you to my granddaughter, Ahinoam. You will never have the chance to meet this amazing child, as her brief life lasted only fifteen days. This happened over ten years ago, and the pain of losing this long-anticipated baby may be somewhat dull, and a bit tarnished, but the wonder of her life, and the influences she had on other lives, is a strong as ever.

She was so peaceful, and so relaxed, that her parents refrained from touching her so as not to disturb her rest.

By Sunday morning, with the departure of the “extra soul” that had joined her for Shabbat, her physical being took a turn for the worse.  Her body temperature dropped, her breathing rates accelerated.  Ahinoam was fighting for her life.

We prayed.  We prayed and cried and begged. Hundreds of people from all over the world joined in our efforts to beseech the Heavens to overturn the decree.  And it seemed as though we saw immediate response to our prayers.  We would pray, and her heart rate would stabilize.  We would travel to the Holy Kotel, and her oxygenation rates would improve. G-d was so ever present during this much unified period.

We were amazed at the efforts of friends, neighbors and even friends who we had yet to meet, who all joined forces to save Ahinoam.  We arranged a group of 40 women to perform the special feminine mitzvah of “taking challah”.  People who had never baked bread in their lives called to get explicit directions as to how to prepare the dough, and how to mix the spiritual element into the physical combination of flour and yeast and water.

The response was overwhelming; we asked for 40 women, we compiled a group of over 120!  People who regularly baked challah were amazed at how much higher their dough rose, how much sweeter the challah tasted.

People who agreed to share in the mitzvah for the first time in their lives reported on deeply moving spiritual experiences, and exceptionally delicious results.

Ahinoam brought together all kinds of people in Am Yisroel. One night, when things were looking especially grim, a Rav suggested that a group of men divide up the entire book of Psalms.  He recommended reading Tehillim after midnight, and after purification in a mikve, a ritual bath. No one hesitated.  The entire congregation (who had met at 11 PM for Shlichot prayers) joined together in an intense effort to save our little girl.

How many lives she affected, in such a short time!

My daughter-in-law was amazing.  I had never felt such pride and awe.  She cried—she was heartbroken, as any mother would be.  But her faith was steady. When the doctors came to tell her that, medically, there was nothing left for them to do—that Ahinoam’s kidneys were not functioning, and their arsenal of medicine and machinery was empty—my brave daughter-in-law thanked the doctors for all their efforts and replied that their battle was over; now Ahinoam’s life was totally in the hands of G-d.

My son remained steadfast, beside his daughter’s incubator.  He learned and he prayed, but I rarely saw him cry.  His younger brother requested leave from the army and joined him in the NICU for Shabbat— Achinoam’s 3rd and last Shabbat on this Earth.  While he was there, doctors noticed a cyst on my younger son’s face, and he was rushed into the emergency room.  He was operated on immediately. The doctor said that the cyst sat on a critical junction of nerves and blood vessels in his face, and that if left untreated, it could have caused serious problems, even facial paralysis or a potentially serious blood infection.  My son was spared, thanks to my granddaughter!

I never got to hold Ahinoam in life.  After HaShem returned her precious soul to Heaven, my daughter-in-law invited me to join her in parting from our beautiful baby.  Ahinoam remained, as always, calm and quiet and ever so still.  It was a surreal experience to hold a child who would never grow up, never meet her siblings, never cry and never have any more pain.

I tried to put a lifetime of love into the hugs and kisses I gave that baby that day.  I promised her that we would never forget her.  I thanked her for all the good that she had done, all the lives that she had brought together, in an effort to pray for her short life.  I promised her that I would watch over her parents, and help them in any way that I could, to move forward with their lives.

Ten months to the day that we parted from Ahinoam, we were blessed to hold and kiss and love a beautiful baby girl, Maor Nechama.  Every week, when I recite the blessings over the Shabbat candles, I ask G-d to please watch over all my children and grandchildren.  I bless the soul of Ahinoam and picture the joy and pleasure that my parents must receive from that pure and beautiful soul in Heaven.

No family should have to go through the agony and the pain of losing a child.  I felt comforted by the fact that we were able to see the blessings incumbent in Ahinoam’s short life.  Time and time again, HaShem showed us that He had heard and answered our prayers, even if ultimately, the answer was not the one we prayed for.

After Ahinoam died, someone told us that HaShem sends these special souls to specific addresses. They were never meant to remain on this Earth; their mission is to correct some minor flaw that their soul needed in order to achieve completion.  And HaShem chooses only very special parents to host these souls on their short journey.  My son and daughter-in-law merited to host this holy soul.

May Ahinoam’s soul rise higher and higher in Heaven, and may she be a source of nachat and joy to all.