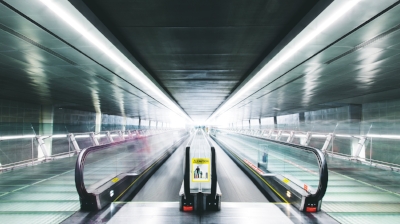 A few years ago, I started a vision board. I cut out my dreams from a magazine and got all ready to visualize my reality.

I never did finish the project.

One photo stands out in my memory. It was a profile of a woman speaking at a podium to a large crowd. I remember that picture because it made me uncomfortable.

Why did I choose it? What WAS that dream? What in the world did I have to speak about?

I felt embarrassed of myself. Who was I to have such a big dream? What was I chasing?

I like to think of life as a moving sidewalk like the ones in airports. You get to choose if you want to walk or stand still, but either way, the path beneath you is moving.

If you choose to walk though, that’s when it gets really cool.

Instead of waiting to get to the other side, you get to glide and every footstep takes you twice as far.

We are being guided, my friend. Life (Hashem) is moving you forward and you can’t stop it.

So the sidewalk moved beneath me. Years passed. I mothered and managed and opened and closed businesses. My kids went to new schools and my other kids graduated their old ones. Birthdays came and went, and one of our daughters even got married. My heart was broken and my faith matured.

And at some point, I chose to walk.

I did none of these things perfectly. Not even one. At my most confident and strong, in the throes of my power, it was, and still is, possible to scrape away the layers and find the fear.

With a fire in my belly and a vision in my heart, I walked.

Sometime into my healing journey, late one night, I stood outside by the car and I said to my mentor, “I feel so grateful. I just wish I could go places and bring this gift to people. I want them to feel what I’m feeling. It’s not about speaking or even teaching. I just want to bring Divine Celebration to women.”

Her trust became an image on the vision board of my mind. She did not ask me how or why. She simply allowed me to want what I want to and to believe it was possible.

I led workshops and retreats and a coaching school, and the moments of Divine Celebration were too many to count. She planted the possibility, and I followed that vision, even when I ran out of energy or clarity. I would put another retreat on the calendar, with a barely a clue as to how it would happen.

Here is what I learned in the process:

Life responds to your level of belief in yourself.

Each of us is a cosmic channel. Hashem’s light comes to the world through us.

When we believe in ourselves, we expand that funnel. The heavens themselves say, “YES. She is signing up to be on our Team! Let’s give her everything she needs to make that happen!”

When we shine our light, we are actually shining Hashem’s light.

It’s what we are here to do.

Fear is constriction; standing in my smallness.

Where I need to be, is in my greatness, an expanded channel for His light.

As I write this, I am on my way back from the Sinai Indaba – the frum world’s biggest stage, where I spoke for thousands of people.

My friends, I was scared. I was so scared. I spoke not once, but ten times. With each time, I expanded.

Fear has no contest when it comes to action. Fear is the Great Illusionist. Action is the reality that pulls back the curtain and reveals its tricks.

One night, standing at the podium, I realized – I’m the lady from the vision board!

It stunned me. How did I get there? How did I end up being that woman on the stage?

The answers are many. Mostly, Hashem has His plans. The sidewalk moves in the way He wants it to.

I did not know how to get there or if I had a “right” to dream.

But I wanted it.

I walked too. And I’m proud of those steps. Growth feels good.

But mostly, I’ve learned a ton about dreams. I’ve learned that when dreaming comes from being truly open to the possibilities, that is enough. Hashem loves to work miracles for us.

So dream – You are bigger than you think.

Be Bold! Visualize! Dare! Hashem is waiting for your Ratzon, for your will. Your will determines His responses to you.

You are as big as you want to be. Expand your vessel.  You were born for this.

It is not our job to make the dream happen. It is our job to expand into the next step that Hashem has for us.

Hashem only lets us see what we are meant to see.

Walking through the fear is the uncomfortable and exquisite process by which you expand yourself and your ability to channel light. Start by cutting out the picture of your dream. Dream it even if you can’t see how to get there.

Then walk on that moving sidewalk, take steps towards your goal. Accept the fear and self-doubt and keep moving. Gather strength from your successes, no matter how small and no matter in which arena.

Meanwhile, somewhere out there, while you are busy with the construction project of your soul, a heavenly committee is planning the stage for your dream to become a reality.