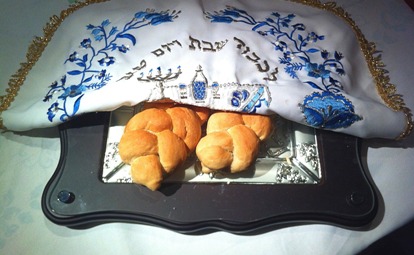 I grew up in a Reform home in West Hartford, Connecticut, in a large, diverse Jewish community. When I was six, my grandfather passed away, and my mother, stepfather, and I moved into my grandmother’s home—the same house my mother and aunt had grown up in. My grandparents had been Orthodox as children, but had become Reform during the 60’s. I was born to a Jewish mother, but we were a mixed-faith household. While we didn’t keep Shabbat or eat kosher, I was raised with a strong sense of tradition and a very clear attachment to my Jewish identity, particularly revolving around Jewish holidays.

I had one year of Orthodox Jewish day school in second grade, which planted early seeds. My long, multifaceted journey to observance was fueled by many remarkable people throughout my life. Every step of the way, Jewish holidays ignited the torch that hastened me to Torah.

PESACH I associated with my grandfather. I remember being four and going to Nana and Poppy for the seder. I asked at the table, “Poppy, does Passover mean pass over the chicken, pass over the peas?” My grandfather erupted in laughter, poured everyone a glass of Manischewitz, and continued the Haggadah. No Pesach was complete without at least one mention of my great-grandfather’s epic homemade marror, which could be smelled all the way out to the driveway!

Pesach 1981 was the first Pesach without my grandfather. My grandmother took me solo to her Modern Orthodox cousin Serena’s house for an elaborate seder, 20 people deep. Serena’s son-in-law was in charge of hiding the afikomen. Five or six of us were vying for it! I was the only one who didn’t know that a prize was involved. Lo and behold, I found it! I was gifted with a beautiful copy of Debbie in Dreamland, which took young readers on a grand adventure through the year of Jewish holidays. I still have that book.

As I moved toward observant practice, Pesach took on a new quality—one of redemption, not only from the clutches of suffering and gashmiut in Mizrayim, but an annual opportunity to remember that we are rescued daily from the symbolic trappings and sufferings that plague us. And if you think about it, Pesach may be the closest thing we have in Galut to Geulah. Every Jew. Every year. Every table. Haggadah open, reciting an ancient story that we are commanded to teach across every generation. We follow this order, and eat matzot, cry on salted greens and bitter herbs, shake wine droplets onto plates, and remember that we are a People.

My first meaningful exposure to PURIM was in that same day school. Back then, it was just costumes and festival. My mom loved Purim, but in our house, it took on a more serious tone. However, she reveled in telling me about the naughty Vashti and her bad skin. She was particularly a fan of groggers and stomping at the mention of that horrible name. Queen Esther was a topic of frequent conversation, and since we are of partial Persian descent, Esther HaMalka was a key figure to admire and emulate.

As I started to find my way to true Torah, the story emerged as a redemptive tale of perseverant fortitude against a massive common enemy. Learning more meant I came to understand the holiday was about real teshuva and being willing to stand by the Torah. And it was a collective teshuva. Achdut. Purim exemplifies that the seemingly insurmountable can be overcome by teshuva, tefillot, submission to Hashem, and standing in a place of absolute emunah, where one completely surrenders to the promise that Hashem will personally carry us into His individualized true purpose for us among the Jewish people and in the world.

ROSH HASHANA carries an air. Have you ever felt the energy shift around you—something you cannot quite explain well in words—just before Rosh Hashana? The rabbi had been preparing us in Judaic Studies class about Rosh Hashana. I began to doodle. It’s a no-no to do this, but I was seven. I drew a picture of Hashem, seated at a judge’s desk, wearing a crown. The rabbi seemed pleased that I “got it”, even if I was doodling in class! Hashem is the True Judge, and Hashem is King. I would be standing during davening, and the words would leap off the page. King of the Universe. My Rock and my Redeemer. I make You my King.

This surrender culminates with YOM KIPPUR, when Hashem really seals the shidduch. He provides each of us yet another chance to give ourselves to the relationship. Asking forgiveness is not just about purifying the soul from transgression. It’s about stepping into the truest form of humility. It’s kind of like marriage that way. You are no longer just doing your thing. Rosh Hashana is erusin. Yom Kippur is the chuppah. Neilah is stepping on the glass. Oh boy, you’ve committed now! Every anniversary, we remember that commitment.

The first time I davened in an Orthodox shul for Rosh Hashana as an adult, I remember bowing all the way down to the floor in Shacharit and feeling a real sense of service. It is key to remember that Hashem does something very powerful in the Rosh Hashana davening. First, He reminds us who He is. The next day, He gives us a choice. This annual choice demonstrates a daily choice—a choice to take Him as our King, for certain, but also a decision to have a relationship with Him, built out of trust and love. While each and every Jew is covered by the Most High, He lets us draw near to Him. He tells us, Hey, kid, you are not free-floating. You are in My Dominion. I’ll let you find parts of Me if you seek Me.

SUKKOT and I had a funny relationship when I was a child. Many of my friends had this cool shack thing in their backyard, and we didn’t have one. I begged for a sukkah at our house, but to no avail. I made my first bracha, l’shev b’sukkah, at school. I was kind of intimidated. I looked up at the reed-like roof, and it was very dark. There were about 100 of us kids at lunchtime being guided in the bracha, and yet I felt like I was the only one. After everyone went back to the lunchroom, I took my tomato soup out there and stood in the middle of the sukkah, and there I found a haunting solitude. It was not an easy time in my young life, and something was pulling me.

Fast forward a bit. As I got to know the frum Boston community, friends invited me to their sukkahs. I fell in love with the holiday. I noticed that inside a sukkah, there is no such thing as time. All my life, I had always managed to shake a lulav and etrog, but now I was learning about the allegory to personhood. A number of years into my observant trek, but before I was really keeping Shabbat, I was walking home from a night seudah in the crisp fall Boston night. Those reminiscent feelings from second grade returned. This time, instead of a haunting feeling, an epiphany came in its place. I realized that Hashem had carefully and purposefully preserved everyone in every generation before me. They had made it out of Egypt, Babylon, Roman Rule, and had escaped persecution in Persia. They had survived brutal winters and had left Ukraine, just in time to elude the deadliest pogroms. They had survived the boat ride to New York and had managed not to perish from disease or poverty. All so that I could be standing here now—walking home from a Sukkot seudah. It was then that I decided that if Hashem had worked that hard to safeguard all those people so I could be standing here, I could give Him the commitment to the Shabbat He created.

The first time I experienced SIMCHAT TORAH was with my babysitter and her grandparents, who took me to synagogue for a spectacle of exuberance. There, I learned how to dance, spinning circles inside circles. Over the mechitzah, the men proudly displayed the Sifrei Torah, which were bobbing up and down in rhythm, held well above their heads. That visual never left me. Torah is alive, not a dry, stagnant work of commands and admonitions on parchment. Torah is a breathing instrument of access to the Most High. Who wouldn’t celebrate that!?

CHANUKAH, like Purim, reminds us about the unification against those who ridiculed Torah and tried to scour it from us (are we seeing a theme here?). The gradual increasing of light as the days pass inspired two related symbols for me. One is that as we grow in Torah, we get more of its light and become more aware of our true selves. Two is that a light is lit by another light that lights another light that lights another light. This infinite chain is represented by eight days. Eight days, as is taught in Chassidut, represents the endless. This also speaks to how Jewish souls light one another.

SHAVUOT is a time of comfort. Holding the Torah is a hefty job. How can we be ready for it? What will I learn from it this year? Torah is quite a weight to carry—in study and in practice. So Hashem sits us down with a milkshake and cream puffs, and reminds us how sweet it is and that it can also be kind. Shavout is Hashem giving us a fluffy pillow and whispering in our ear all night, as we let the words of Torah run past our eyes, across our lips, and into our hearts. Shavuot helps reveal the path to Daat Torah.

It was for Shavuot I made my first trip to Israel. I had a shidduch prospect, and I figured, hey, it’s a great chance to finally go to Israel, too! On Shavuot, I davened by the kever of David HaMelech in the Old City. It was on that day that I realized I had to make Aliyah—before I even really knew why!

SHABBAT is the holiday of holidays. Shabbat, why did I avoid you for so long? I wish I knew you sooner than I did! I didn’t grow up understanding you, but I now that I am grown, I cling to you! Shabbat is the key to the gates of Jewish life. I really took my time learning about it and studying how to keep it. I did not race in. For some people, they just go do it, and then figure out the hows and whys later, but I really needed time to build a relationship with Shabbat with as much fervor as I had in the rest of my dedication to connecting with Hashem in my life.

Thanks to really beautiful guidance by my close friends in Boston, and the community there, I did not just do Shabbat, but I found my path through it. Every dvar Torah. Every discussion. Every question. Every answer. Every song. Every lightning moment. When I came to terms with Shabbat, it was then—and only then—that Hashem could really move in my life, and finally (after a 40-year wait) introduce me to my husband, who, like me, was a child of a Jewish mother and a non-Jewish father. We came together, unified in the pursuit of Torah. And yes, he was the Shavuot shidduch prospect!

They are what we live.