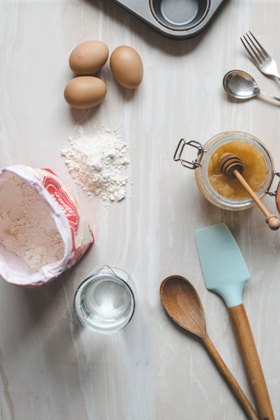 You would have thought by now that I would have learned my lesson. Closing in on two full decades of being frum, I can recall exactly one instance where paying to learn about emuna did not leave me feeling frustrated, angry, anxious, dejected, or all of the above. I never learn. Not too long ago, I ordered yet another CD set that promised to show me how to make emuna central in my life, how to internalize the certainty that every moment of my life (and every other person’s life) is the outcome of precise planning by an all-knowing, all-powerful G-d—be He a loving Father or an endless, boundless quantum Force.

The CD set was made up of individual lectures, each focusing on one aspect of emuna. In one of the first, the speaker promised to give over “the steps” to achieve emuna. Spoiler alert: There were no steps. Imagine if a speaker said they were going to give you the steps to make a perfect cake and then didn’t offer any ingredients, or instructions, or ways to troubleshoot if something went wrong. Instead, imagine the talk went something like this:

“It’s vital to be able to make the perfect cake. Indeed, one cannot truly be a Jewish woman without producing a perfect cake. Once, a sainted woman’s town was overrun by Cossacks. They stole three of her five cake ingredients, and yet her cake was still perfect. And even she did not achieve the level of the woman whose house was burned down in the Inquisition, who baked the perfect cake using only the ashes of her destroyed home. Truly, you just need to be like these women, and all your cakes will be perfect. The end.”

I should have stopped then and passed the set along to someone who would be inspired by it—and I am certain that some people would. But I continued. In the next talk, the speaker told the story about a young Jew who was struggling with his emuna. He went to a gadol and told him of his challenge, and, the speaker said, the gadol looked at the young Jew and wept, because he could not imagine a life without perfect emuna. Now, I have no doubt that the gadol said more than that, giving the young Jew chizzuk and guidance, a way to move forward, but that is where the speaker ended, with the gadol weeping. Not guiding, not helping, simply weeping. And that is where I parted ways with the CD set.

And here’s what I suspect—deep down questions about emuna and bitachon are complicated, and they are personal, and for many of us the answer is simply never going to be found on any tape, or in any book, or in any one-hour shiur. I imagine now that gadol weeping not for the young Jew who had come to him with a question about emuna, but for the Jews who had questions but hadn’t come to ask them, and for the Jews who would ask, but would ask those who simply didn’t have the tools to answer them.

It happens that I don’t struggle with emuna qua emuna. Ani ma’amin be’emuna sheleima…The evidence of G-d’s planning is everywhere. As a midrash about Avraham tells us, the existence of a building tells us of a builder. How could the universe not indicate the existence of the Builder to end all builders? My challenge is in the area of bitachon—the trust that HaShem is with me and will support me through all my troubles.

When life is going well, I have the knowledge that my successes and blessings come from G-d. But in those moments when life is at its worst? It’s all too easy to listen to the doubts that G-d is still at my side, and at the side of those who suffer the most crushing of burdens. It’s all too hard—seemingly impossible—to find the hand of G-d when I’m searching in darkness. (And, in a whisper: Why would G-d be on #TeamMe in those moments when I don’t want that myself?)

But, as one “inspirational” article on a frum website recently pointed out, I am not alone in this struggle. No, for an example of a person who had emuna but struggled with bitachon, I have to look no further than…wait for it…Paroah.

Wait. For asking a question, I am Paroah? Not a person who maybe needs to spend a little more time checking their hechsherim or their hemlines, but a straight-up rasha? It seems nonsensical that some questions about what we need to do to cleave more closely to G-d make us appear to be pious and upright, while others make us appear to be dangerous and suspect.

Maybe the difference is in the quality of the answer. Questions of emuna, questions of bitachon—they aren’t as simple as kosher, not kosher; too short, not too short; mutar and ossur. Answers—real answers—to questions about emuna and bitachon require us, both the asker and the answerer, to delve into the places where we are messy, where we are broken, where we are at our most human. Simple emuna may be the goal, but for many, getting there isn’t simple at all.

For me, the most help has come from people who acknowledged that the path is as important as the goal. As I continue to work on my bitachon, I remember something I heard Rabbi Binyomin Pruzansky say. In the eyes of HaShem, “the battle is the victory.”