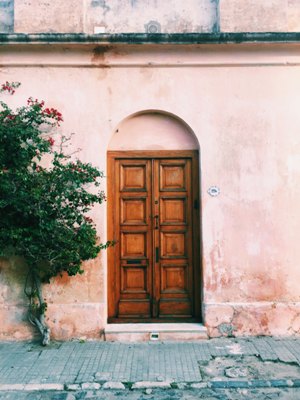 In my life as an Orthodox Jew, there have only been two shuls where I have felt at home, and where I didn’t feel judged about my background.  The first was at the Kosel, and the second was a Chabbad shul in South Carolina.

When I first laid eyes on the Kosel, I was an 18-year-old girl, and I had just landed in Eretz Yisroel to attend seminary.  It was my second time traveling with a passport—the first time was my one-way trip from Russia to America, 10 years prior.  At 18 years old, I felt so exotic coming to the ancient land of our forefathers.  As I stood there in the silent night, looking at the illuminated Wailing Wall, my heart tore into a million pieces, and all I could do was blink back tears.  I was so relieved to be somewhere where I was simply a Jewish daughter.  I felt like I was in my Father’s arms.  I tore my Conway shirt and recited the prayer that aveilim say, eyeing my new classmates and our madrichot.  As I approached the Wall, I placed my hand on the warm stone and opened up my siddur to Maariv.  I let the tears fall, as I placed the siddur over my face, and I asked Him for everything.

I came back to the Kosel too many times to count in the following two years I spent in Eretz Yisroel.  It was a like the fix that I needed to survive, to breathe, to live; prayer at the Kosel was vital.  When I was there, nothing else mattered.  It was just me and Hashem.  It didn’t matter which brand shirt I was wearing.  Or that my haircut was too short.  Or that I didn’t have money.  There, in front of the Wall, I stood proudly, and just davened.  I remember when I knew it was my last time there; it was my last stop before getting on the plane back to America.  I let go like I would a dear friend—with a huge, heartfelt hug and many tears.  For months after I landed in New York, I would have dreams of being back there, at the Kosel…and then I would wake up, and it was gone.  And I was alone in a basement in Brooklyn.

As far as tefilla went, Brooklyn proved to be a whole other playing field.  You could attend shul, but if they didn’t know you, you would have to sit in the back.  Every High Holiday, you had to pay for a seat.  And even then, members got priority.  Somehow, I was always placed in the back with the screaming children, since I didn’t have a father or a husband that had clout in the building.  It was always hard to hear the chazzan.  I didn’t know any of the ladies.  My clothes were not right.  But my deep desire to serve Hashem overshadowed all of it.  I was so blind to all the obvious obstacles, that they didn’t hit me until I was married with 3 kids…and missing the high of being newly frum.

When it was time to settle down and buy a home, my husband and I were shocked at how expensive it was to live in our community, where we loved the shuls and where my husband was a member of the kollel.  So we had to make do with what we had.  We settled in a new community without a minyan.  It wasn’t the end of the world, because a Shabbos minyan was a 40-minute walk, and we were hoping that more people would move in eventually.  Baruch Hashem, it was a beautiful home, and the price was right, so we did what we had to do.

And then the community grew.  It grew into a place that was really not one which we would call home.  The shul got big, and we tried very hard to open up a minyan that had a more welcoming feel.  That’s when shul politics became out of control.  People began to fight and malshin, money stopped trickling in, and to top it all off, some people went and opened up a third minyan, taking all of our mispolilim with them!!  And when my husband, the tzaddik of a man that he is, went to daven in the third minyan, no one said a word to him.  The door was clearly slammed in his face.  People actually expressed their hate toward him because he was involved in the second minyan.

It was an impossible situation. It was a hopeless situation.  It was one for the books.  Shabbos became a day we simply dreaded.  My two boys had nowhere to call home.  My husband was unhappy.  “Move,” the chachamim advised.  But where to?  We had jobs, and our kids were in schools, and what if the next place we moved to would be just as bad? What if the next shul we’d go to would also have a door?  What if the people would be unwelcoming, so ensconced in their cliques, and so enamored with their circle of friends?  What if there was politics?  In addition to all of that, the value of our home had doubled, but the value of all the other homes had doubled as well…so we were stuck having to downsize.

And then we took a trip to South Carolina.  It was the end of the summer, and it seemed appealing.  We stayed on the beach, and there was a Chabbad shul nearby.  Also, a kosher restaurant!!  We had an amazing time, but what really stood out to me was the shul.  We went there on Shabbos for the day meal.  The Chabbad girls were shoveling out food onto serving plates, as they welcomed us with a smile that held no judgment.  They didn’t ask me where, why, how…it was unconditional acceptance.  We were a gathering of all types of people for the meal that Shabbos in the summer.  The Rabbi asked the men to stand up and share some thoughts.  One by one, the men—bearded, clean-shaven, hat-wearing, kippah srugga-wearing, or wearing nothing at all on their heads—stood up and spoke from their heart.  How grateful they were to be here, how grateful they were for Chabbad, to be keeping Shabbos in a state that was not known for its widespread Yiddishkeit.  It was a beautiful, inspiring moment for my heart, which had laid dormant for way too long.

How do we go on from this story?  We hope and pray for a brighter future.  We look for people whose hearts don’t have doors.  Open hearts and open minds, capable of a love strong enough to keep us moored to a religion which is not perfect.  There’s nothing like the Kosel, and there never will be.  Shuls will always have politics, and people will never be G-d.  Life will always get in the way, challenges will always blow smoke in your face, and money will always be an issue.

And yet the Chabbad shul in South Carolina will always be free.  And the Kosel will always have no doors. I will keep this in my heart, as a slow-burning flame which will warm it from time to time, which will keep me connected through the hard times, and keep me close to Hashem, until I find a home where my heart can pray freely and deeply, without any barriers—and missing the doors.