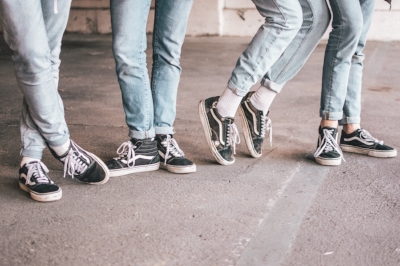 I think we’re going to have to move.  This is the third time my son has come home crying from the neighbor’s house.  And this is only the middle son.  This happened to my oldest as well.  It hurts to see your children cry because of other children’s comments and rude remarks.  It hurts to look out the window and see all the neighbors playing together, while your child is left out.  You feel powerless.  Out of control.  And sad.  So so sad.

I didn’t intend for things to end this way.  We moved to the block as pioneers of a brand new frum community.  We had a 2 year old back then; we were brand new at parenthood.  Play dates and friends were not part of the picture yet.  And in his playgroup, our son was well adjusted and happy.  He had friends.  The teachers loved him.  In my wildest dreams, I never imagined that this child would come home crying from a neighbor’s house.  He, who is so talented and so friendly.  He, whose outfits I pick out carefully each day, so that he will fit in and look put together.  And, G-d forbid I send him to school with the wrong snack or lunch.  I promised myself that my childhood would not be his.

I grew up in the shadows of all the popular girls in school.  I never had the right shoes, the right knapsack, or the right lunch.  My mother was clueless because she wasn’t frum and knew not of what girls in my school were wearing and eating every day.  My mother was an immigrant who barely spoke the language.  I was an immigrant myself.  I didn’t even know what the word Venettinni meant.  The truth was that we were dirt poor.  How I ended up sharing a classroom with the ffbs (“frum from birth”) is a story in and of itself.  But here I was, in my Bais Yaakov uniform, sitting in that class and feeling so different.

Eventually, I grew up and made friends.  My friends helped me find the right outfit and the right job.  As soon as I got my hands on a salary, most of it was spent on fitting in.  That quest never stopped.  Of course, I had experienced rejection when I was a child, but the future that I envisioned for my children was a different one.  How, then, after all my hard work, were my children treated differently than the others on the block?  Because, as a frum community at large, we are raising cookie cutter children.  And if your child doesn’t fit the mold, he will be left out.  If he doesn’t go to the right school, if he doesn’t learn the same way as the others, or if his behavior is noticeably different, there is no hope for him.  He will be left out of every single game, every single classroom, and every single house on your block.

You might be sitting on your couch, on a Shabbos afternoon, reading this, and be smugly thinking, Well, that will never happen to my children.  They are normal and I am normal, and I am part of the club where I live and where I send my kids to school.  But it is exactly thoughts like these that create the tears streaming down my son’s face, on yet another Shabbos afternoon.  Feeling that you are safe and your children are like everyone else leaves you looking no further than your mirror image.  You will never be the one to change the world and make this world a better place for ALL children, not just your own.  You will not really be following in the ways of Torah.  You will be enabling people to feel a pain like you have never felt and a distance like you have never seen.  In fact, this kind of attitude makes me question the point of yiddishkeit.  Aren’t we all in the same boat with the intricate mitzvohs and the same connecting values?  Aren’t we brothers and sisters?  At least, that’s what I was told when I was becoming frum.

I need to move.  I dream of a place where my children will be accepted, no matter their differences.  Where children are as colorful as the rainbow and as accepting any open heart can be.  Where people don’t judge.  Where people try and understand.  Where people aren’t in a bubble that has been created by a fearful society.  I wonder if such a place even exists.  I know, from speaking to friends, that this happens and there are blocks of wonderful Jewish people.

But for now, it is an unreachable dream.  One that I could almost touch, but not quite.  My house is just a house and could be sold.  I could make a new house my home.  I could trade trees for friends.  I could trade space for play dates.  It’s a hard decision; it’s not easy to move, but it has been suggested by many.  But the next time I move, I will interview every person on that block.  Not really, but I will be so much more careful in my choice of neighborhoods and blocks.  This will affect the lives of my children and my faith in yiddishkeit.  I hope that I am brave enough to actually do it.