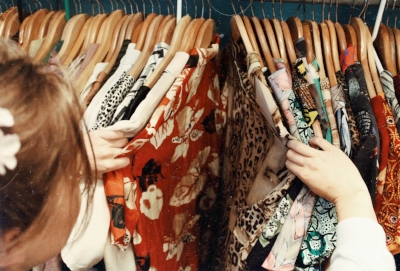 It was hideous! In my opinion, it was simply a monstrosity. The piece of clothing, if I may be so daring as to call it that, hung limply off the hanger in a local thrift store. My almost ten-year-old daughter and I had been bargain hunting. The talented art of thriftiness is, for some, a learned endeavor. I am proud to say that I come by it naturally.

Growing up in a house of frugal women had taught me early on the almost magical skill of bargain hunting in anywhere from garage sales to posh antique stores to rinky-dink second hand shops, run by misplaced hill-billies, who have no taste in clothes or furniture. That particular day had found us in the latter. Even so, I had already snatched up the only worthy finds in the whole store. I was actually heading toward the front of the store to make my purchases, as I slyly calculated how much of a good deal I was getting. Going by the handwritten tags, the total was going to be somewhere around fifteen bucks for five name-brand dresses in excellent condition. I would offer the toothless sales clerk five dollars for the whole lot and most likely wind up paying eight. Such a deal!

Then I heard my daughter gasp and say, “Look at this!”

Excited at the possibility of getting another fabulous steal, I turned to look. Smiling from ear to ear, she held up the saddest excuse for a floral skirt I had ever seen. Sure, it was modest and all, but it was way too long and from way too many generations ago! The combination of avocado green and neon orange gave me a headache just looking at it, yet my daughter stood grinning at me with that “can you imagine?” exhilarated look.

I said the only thing I could without losing my lunch. “Wow!”

“I know!” she commented with a grin that told me she was oblivious to the fact that my “wow” reaction really meant “I-can’t-believe-how-horrid-that-skirt-is.”

I hate these frozen-in-time parenting crossroads that force me to delve into all my childhood demons and face my mother and me twenty years earlier. It would seem that the older my children get, the more of my mom’s sayings, threats, and opinions start popping up. In this situation, it was as if I was under some kind of mind control. I could imagine myself saying to my daughter, “You don’t actually like that, do you?” I wouldn’t mean to criticize or insult her taste, but I would have managed to do just that in three seconds flat!

Shopping was supposed to be fun. We were supposed to be bonding, and all because some old lady with bad taste had donated her relic from the past to this secondhand shop, my afternoon was going to be shot.

There was without a doubt only one way to solve this and not become the type of mother I didn’t want to be. I would have to prove to my daughter that my love and respect for her ideas goes way past the frivolousness of good taste in clothes. There was only one way to proceed. I was going to have to buy her the skirt.

It nearly did me in, but I ignored the critical part of me that cringed. I’m happy I did it. Later, as we drove home in silent contemplation, I thought of what I had accomplished despite my initial reaction. I managed to get all the dresses for six-fifty, the skirt for seventy-five cents and my daughter’s pride in herself for the low bargain of holding my criticism to myself! It was, after all, only a skirt — an ugly one, but still only just a slip of material that she will grow out of in no time (I hope!).

I’m proud of myself because I had picked my battle carefully, played my strategy well, and it felt good. It gave me an easier afternoon, and it gave my daughter a chance to exert her own choice and to slowly shape who she is and what she likes, without me holding her back. I learned it was best to save putting my foot down for a more serious lack of good taste. After all, she could have chosen such a skirt as a gift for me!