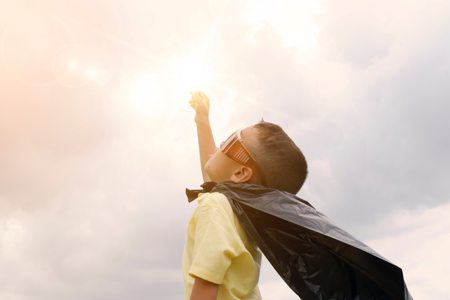 My daughter had a minor surgery done a few years ago. To prepare her, my pediatrician recommended the book, “Franklin Goes to the Hospital” by Paulette Burgeouis and Brenda Clark. In the book, Franklin (a turtle) hurts his shell playing soccer. He needs to get it fixed and requires a surgical procedure. During the days leading up to his operation, Franklin’s friends and family keep telling him how brave he is. When he arrives at the hospital on the day of his surgery, the nurse tells him that they need to take an x-ray. Franklin—a usually mild-mannered turtle—refuses, and starts to cry. The nurse asks him what is wrong. He says (and I paraphrase): “Everyone has been telling me how brave I am. But if you take a picture of my insides, you will see that I am very scared. I am not brave at all.”

Now is when the book gets really good. The nurse calmly explains to him: “Franklin, everyone gets scared, especially before a surgery. Doing what you have to do, even though you are scared to do it—that is what makes you brave.”

I thought that that was the best description of bravery I have ever heard. It gives kids and adults a clear understanding of what bravery is—doing what we need to do despite being scared.

We tend to admire brave people, but we generally think that they act with courage because they are fearless. We focus on the act of bravery; we rarely think about the conflict and the fear that they may have experienced before they acted courageously. Could it be that they were fearful…and that they overcame those feelings to do something great? If that is the case, isn’t that what makes them truly brave? Like it says in Pirkei Avot:  “Who is truly strong? The one who subdues his inclinations.”

I think the Purim story illustrates this idea of courage in a powerful way. Mordechai sends a message to Esther and tells her to approach the king to save the Jewish people. Esther basically tells him she can’t—she is scared (and rightly so). She has not been called to the king in 30 days, and anyone who approaches the king without being summoned will be killed.

And then, in one of the most moving speeches in the Megillah, Mordechai tells Esther that she must lay her life on the line in order to save the Jewish people. Esther takes her fear and puts it on the back burner. She prays to G-d, and she fasts. And then she goes to see the king. She puts into motion one of the most daring, understated and successful rescue missions in Jewish history. She embodies bravery and courage.

Because of this, she is immortalized as one of the greatest champions of the Jewish people. We read her story, year after year, as a tribute to the fact that she did not let her fear overwhelm her. She overcame it and acted with courage.

This is an important lesson. Children in this modern age have many fears. Family discord, separation anxiety, or any type of change. Terrorism and other “bad guys”. They also have their little fears—loud noises, the dark or monsters under the bed. Teens have fears of not doing well in school, of not getting into college, of not fitting in. They can use stories and role models to help them cope.

So even though my kids are older now, we still reference the Franklin book. I tell my kids, “Remember, being brave and doing brave acts does not mean that you were never scared. It means that you were scared, but you did what you had to do anyway, just like our great leader, Esther HaMalka.”

We have so many stories in our Jewish heritage that can support this definition of courage. Avraham Avinu stood up to Nimrod, Yosef HaTzaddik dealt with Pharaoh and settled his father and brothers in a strange land. Moshe, too, met Pharaoh head-on. Shimon HaTzaddik faced Alexander the Great. Later, there were the Court Jews. Bibi Netanyahu has to address the United Nations.

Let’s tell our children: Yes, they were probably scared. But they overcame their fear and did what they had to do. They knew that they needed to in order keep the Jewish People alive and whole. And if you have to, with G-d’s help, you can do it too.

Have a wonderful Purim!