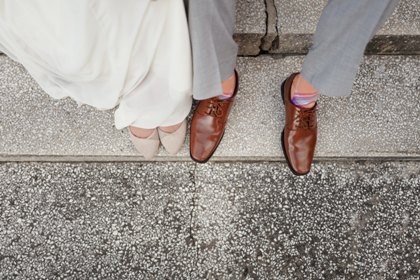 I struggled as a newlywed.

I was pretty sure it was because my parents were divorced.

No, I was pretty sure it was because I had too many boyfriends before I became frum.

No, actually, it was probably some deep defect that would have cropped up regardless.

The point is, I struggled as a newlywed.

And I have a pretty fantastic husband. (Bli ayin hara, pooh pooh pooh.) I even remember one teacher in a shalom bayis class that I was taking joking, “Why are you here? We all know what a mensch your husband is!” (“Well, yes, but it only takes one to mess it all up…and that one is clearly ME!”)

I thought to myself:

Maybe I don’t have enough self-control.

If I had more self-control, I wouldn’t lose it when he is so irrational and incomprehensible.

No, it’s that I don’t have enough confidence.

If I had more confidence, then I wouldn’t be constantly checking the pulse of our marriage, wondering if it’s all about to fall apart.

Yeah, authenticity. I am so busy trying to “behave” as the perfect wife that he lost me in the process.

And sometimes, I don’t even want it to work out.

It is just too hard.

But that’s ridiculous. I’m great, he’s great, and we’re totally madly in love, and giddy, and on that newlywed high—which is so amazing—and I’m pretty sure that we are too far in at this point. I should just stick it out.

Also, I really love him.

I am too far gone.

I was sure I was the only one.

I think it was my parent’s divorce that saved us, since I was sure I had no reliable information about healthy marriages. I was, perhaps, a little obsessive.

I studied happily married couples—how they spoke to each other; how they divided the household duties; how they managed the children.

We took every shalom bayis course that came our way. We actually got so burned out that our rav told us it was enough already. Once you know everything they’re going to say, you can take a break!

I studied the literature. Secular, frum. I wanted to know what the Torah says and what chemicals are firing in our brains.

We listened to Rabbi Tatz’s marriage class (simpletoremember.com—I highly recommend it!) each month for years until he too told us it was enough already. “I didn’t actually expect you to take me literally when I suggested that!”

I was sure we didn’t know how to make it…so we worked on becoming experts instead.

But there was a huge piece missing.

I’m a pretty emotionally-connected person. I feel my feelings intensely. And I am BIG on being authentic.

So at this point, I had a really great idea of how healthy couples acted. And I had some very important information that helped me understand my husband better and have fewer of those big, bad emotions.

But then something would happen.

It usually wasn’t a discussion about major values.

Once, it was about the fish I had blown our budget on falling off the pan onto the treif part of the stovetop. Our rav told us it was fine (after lots of questions), but I was having some of those big feelings at this point and threw the whole thing in the trash.

It wasn’t the fish.

It was the money, and my inability to manage cooking dinner, and my overall belief that I was pretty much broken, and this was just one more piece of evidence that I couldn’t hack it.

Years later, my coach trainer finally shed some light on this for me.

You see, I was sure I was a failure. And I was trying to show up happy and confident. And there’s just only so much self-control that one woman can have, and that kind of act burns up all of it. Fast.

And while I was so busy acting the part, what I didn’t know is that I could have challenged that thought.

What if I’m exactly as I should be?

What if burning dinner is disappointing, but also normal?

I was fascinated. This was everything.

All of our big feelings—and we feel them when we’re newlyweds, when we’re single, when we’ve been married a long time—come from our thoughts. You may have heard this idea, because it’s not new, but bear with me:

When our husband drives us crazy…we are actually the ones driving us crazy.

Yes, he did or said something. But that’s neutral. And then we made it mean something. And that’s optional.

And I can make it all mean whatever I want.

So this is what I do now. I still have big feelings sometimes, but I have tools to understand them. I’ve learned that just because my brain tells me something (i.e., “You’re a mess!”), doesn’t mean it’s true. My brain is just offering me a thought, and I can decide to take it or leave it.

And sometimes I take it, and I do have negative emotions. But I’ve learned that those are okay once in awhile, too. And occasionally, it seems that feeling anxious is lethal, but it’s really just uncomfortable.

I can do uncomfortable.

And some days, I forget it all, and I’m not my best. But I’ve learned that that’s also alright. And some days, he’s stressed, and he’s not his best. And I love to allow that in our relationship—this is a marriage where we can be cranky sometimes.

I can’t go back and teach all this to myself ten years ago, but now I get to teach and coach newlyweds, which is a tremendous honor.

We hash out those big feelings. And we question them. And man, the women I work with are SMART. And their brains have them CONVINCED that the situation is really bad, whether it is their husband, their finances, their mother-in-law, their husband’s job…

But those are all neutral. How we frame the situation though—that is our choice.

The biggest gift, I think, of being a newlywed is that while we set out to understand this other person better, and we stretch ourselves to grow and accommodate and be better, we also get to discover ourselves in a whole new way.