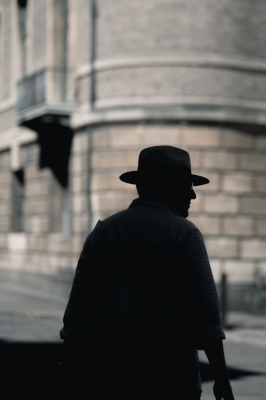 My husband came home from work and told me he needed to talk to me about something. As soon as he uttered those words, a big part of me was relieved that it wasn’t something worse, something more traumatic for us or the children. After all, I was completely estranged from that man for the past 10 years, and my children wouldn’t have recognized him if he was walking on the street. I said goodbye when I cut him off 10 years ago, so my life would not change in any way.

Yet, I had dreaded this moment for years. Not because I was going to miss him, not even because of the lost hope for reconciliation. I knew that ship had sailed for many years already. There are no feelings of loss or even regret.

I dreaded this moment because I didn’t know how to grieve a parent who wasn’t in my life for so long. According to Jewish law, one is required to go through a ritual mourning process for a parent. The first week post-death is known as shiva, during which immediate family members stay home, and visitors come to comfort the mourner by bringing food and taking care of mundane tasks so that the mourner can concentrate on the healing process, either by talking about the deceased or anything else. Visitors are expected to sit with the mourner, listen, and give whatever verbal comfort that they can. The mourner sits at home, wears the same torn garment all week, avoids mirrors and putting on makeup, and even tries to avoid showering if possible. After the shiva period, the mourner resumes daily routines but is still discouraged from going to parties and large social gatherings for the following 11 months (the first month being more stringent than those that follow).

I have thought about how I would feel when my father died ever since I cut him off 10 years earlier; all that time, I had dreaded the idea of observing these restrictions for someone who wasn’t even in my life. I imagined feeling resentful for turning my life around for a week, and to some degree a year, to honor a man who took absolutely no responsibility as a father. A man who was so cruel to my mother, and used me to hurt her, not caring that he was hurting me too. A man who would come in and out of my life as he pleased and expected me to take all of the initiative in maintaining our relationship. I thought about how I would explain to my children why I needed to do this for someone they don’t know.

Most of all, I thought about how to respond when acquaintances and visitors would try to comfort me and assumed that I was mourning a beloved father.  Do I thank them politely and then change the subject? Do I open up about the estrangement? If so, to what degree? How can I be honest about the person he was without trampling on his grave? People’s reaction to a child being estranged from a parent tends to be negative and, at times, judgmental. Maybe people would think I was a bad person for not being in touch with my father. Many relatives, from both my father’s AND mother’s side, have called me disrespectful on numerous occasions for not talking to my father. What can I say to them? If I spoke about him honestly, maybe they would call me disrespectful again. If I just focused on the positive, they would probably call me a hypocrite. And what about the people who came to visit who did not know me very well? Would they judge me too? Would they think I was a horrible person? Or would they just sit in awkward silence because they would be afraid to say the wrong thing is such an atypical situation?

When my husband uttered those dreaded words, I didn’t have much time to think about any of that, even though it had been on my mind for so many years. There were too many arrangements to be made for the funeral, and I realized very quickly that I wanted to be the one to make them. I was overtaken by a strong desire to be regarded as his daughter, and planning his funeral would make me feel like I was. I tracked down my childhood rabbi, who my father’s brother (ironically my favorite uncle!) and I both agreed should be the number one choice to conduct the funeral, and he graciously agreed to rearrange his schedule and come the next day to perform the service. I spoke to the funeral director about making sure that everything would be done according to Orthodox Jewish law. Being that my father had introduced religion into our family, and I had continued to practice Orthodox Judaism, I felt good knowing that I was giving him the honor of having the burial he would have wanted.

I had a lot of anxiety about going to the funeral. I was afraid of facing his mother, my grandmother, as our relationship has always been contentious due to the estrangement. I was afraid of my very traditional relatives saying or even implying that I was a bad daughter and that I didn’t have a right to grieve. I was afraid of being the only one who wasn’t crying or sad, and people thinking I was a cold and heartless person. I was afraid that people wouldn’t approve of the honest eulogy I planned to give. Yet in spite of all of this anxiety, I walked into the funeral with my head held high and took my rightful place as the daughter of the deceased. My father being a deadbeat did not take away that right.

As I watched the casket being lowered into the ground, I felt a closeness to him that I hadn’t felt since I was a child, when I didn’t know about his dark side; I had just known him as this deeply spiritual person who I had hours of meaningful conversations with. At the moment he was being buried, I felt the same spiritual connection with him. For that brief period of time, I let go of all of the anger I had felt for so many years. When his body died, perhaps the deadbeat dad and narcissist had died too. All that was left was his soul, which is the part of him that I connected to the most as a child.

As the funeral attendees were shoveling the dirt onto the casket, I remembered when my best friend had briefly mentioned the Jewish custom of asking for forgiveness from the deceased as he is being buried. Why on earth would I ask for forgiveness from my deadbeat dad? Yet as the dirt was piling on top of his body, I kept saying the same phrase in my mind: “Dad, I hope you can forgive me because I hope that now you understand.” During his lifetime, he was selfish and narcissistic, therefore he believed he was entitled to the same love and respect as a devoted father, and he did not understand why I chose not to give it to him. On the other hand, as a pure soul he was now no longer limited by his narcissism, and maybe he could finally understand that I needed to cut him off in order to preserve the peace and happiness in my own life.

I held onto the connection that I had to his soul, minus the deadbeat dad, throughout the week of shiva and I continue to hold onto it as much as possible. I certainly still have moments of anger, but overall I am much more at peace with my father in his death than I was during his lifetime; and being open about all of the emotions has made the grieving process a positive one.

I had dreaded the shiva process for so many years, but I nevertheless chose to go through it for several reasons. First and foremost, as an Orthodox Jew this was my duty. I had made a commitment to this religion and lifestyle, and I wouldn’t feel good about not fulfilling my obligation. Even with obligations aside, I was compelled to sit shiva for myself, not for my father, or even for God. Shiva is a lifecycle event for a Jewish person, just like weddings and bar/bat mitzvahs. While it’s not as much fun as the happier occasions, it’s still a part of the Jewish lifecycle. As a Jew, and as someone who wished to be regarded as a daughter, it was a necessary process for me to go through. Lastly, the shiva process is supposed to elevate one’s soul, and being the only person who was sitting shiva, since his parents and brother are not religious, I was the only person in the world who could elevate his soul in this way.  He might have been a bad person, but every soul is considered holy. Because he introduced me to religion and spirituality, his soul was the part of him I had connected to the most throughout my life—from childhood until the moment he was buried. Therefore, it is only natural that I do my part in elevating it.

Not only did I feel honored to sit shiva, but I also felt peaceful and happy for the whole week. This was because I had refused to put on a mask and insisted on mourning him honestly. Every single visitor knew that my father and I were estranged, and that I did not wish to whitewash the person that he was. I was completely open and honest about the emotions I was going through with my visitors, and for the most part, it was reciprocated with the utmost kindness and support. I am grieving my deadbeat dad, and the grieving process turned out to be more healing than I ever imagined. While I hope to elevate his soul in the process, the grieving is essentially not for him, but for me.

*This article has been adapted from Olivia’s blog. See below for her blog info.