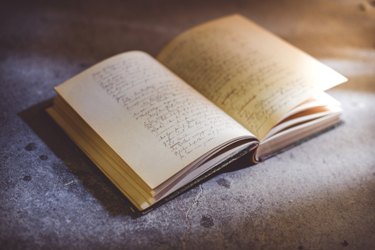 Her name was Betty Crawford, and I have never met her in person, but she has become as dear to me and as close to my heart as if she were a treasured friend. My friend Aliza and I met her, so to speak, at an estate sale about a year ago. But not just any estate sale; this estate sale was held at Betty’s house, and all of Betty’s things, from her clothes to the spices in her kitchen, were up for sale.

I live in Wisconsin, where across the state, no matter what time of year it is, each Thursday begins a weekend-long string of garage sales, yard sales, barn sales and estate sales. For junk hoarders, antique collectors, knick-knack enthusiasts and bargain hunters alike, the weekends are ripe for the pickings. On that particular weekend, I had picked Aliza up on Sunday morning after reading about a local estate sale not far from our neighborhood. Sundays are usually the best day to go, as it’s generally the last day of the sale, and everything is marked down 25-50%.

When we walked up the driveway, we could see people carrying out lamps and large pieces of furniture. We walked around to the front door and began the hunt. Aliza went one way, I went another. We’re pretty seasoned hunters, Aliza and I. We quietly prowled around, getting a feel for the territory, first seeing if the merchandise was what we were looking for then checking if the prices were reasonable. For myself, I had a target item in mind that I’d been searching for—a low black cabinet. So, while scanning the items that might interest me, I kept a lookout for the cabinet.

It hadn’t taken me long to realize that the estate sale was being run by a third party; it was obvious the owner of the house had died. There were too many personal photos around, along with signs up everywhere that said, “EVERYTHING FOR SALE”. It was sad. I tried to block my mind from thinking about the person behind all of the items and just keep shopping, but you can tell a lot about a person simply based on the things they owned. So when I entered the living room and saw a photograph of a posed poodle, dressed in a sweater, in an expensive gold frame, I nearly lost my composure. That photo said so much. Clearly, the owner was a woman. Women like to dress up their dogs in sweaters. And this woman had no photographs of children, so the dog was her pseudo-child or grandchild. So very sad.

I moved on to the kitchen, which was terribly crowded. While four people elbowed their way around each other to get to her spice cabinet and her flatware drawer, I couldn’t look past the recipe box sitting on her counter. I opened it. Sure enough, handwritten recipes in a flowery script—hundreds of them, some even had little notes on them about who had given them to her or how tasty they were—filled the box. By this point, Aliza had caught up with me, and I pulled her aside and showed her the recipe box.

“The person who lived here died!” I said in a hushed tone.
“I know, I could tell too…” she answered sadly, now looking through the recipes herself.

Together, we went to the small den off the kitchen. That’s where I found my black cabinet. For $25, I would later buy it. The owner had been using it to hold dozens of old 78 records from the 60s and 70s.

From there, we moved on to her bedroom—the most intimate, and perhaps the saddest, of all the rooms in her house. Her bed was unmade, as if she’d just gotten up for the day, intending to go back to sleep later…only later had never arrived for her. I had to push that morbid thought out of my head, yet I couldn’t help but think of my own mother’s death several years earlier, and of her estate sale that I myself had planned and organized. Why were all of this unknown woman’s things for sale? Had there been no relatives to take anything personal of hers to remember her by? Why were they selling her recipe box and her pictures?

It bothered me, and I couldn’t hold it in any longer. I pulled Aliza aside again and poured out all these thoughts to her. We talked quietly, trying to piece together this strange story with no answers, and all the while, people just brushed past us, grabbing up items left and right. It seemed so unholy. So wrong. Our hearts ached for this dead lady. No longer shopping, we were now looking for clues to answer our questions.

We headed down to the basement, and at this point, I must admit, we were acting like a couple of junior high school Nancy Drew sleuth wannabes! We were not disappointed. The basement held a treasure trove of clues in the form of boxes and boxes of old-fashioned 1950 slides. We sat down there for about 30 minutes, holding slides up to the light, getting a glimpse of who this stylish lady was in her heyday.

Once done there, we left the basement behind and headed back upstairs to explore the one room we’d yet to see on the main floor—the office. That’s where we found her at last. Rather, we found her diary. It was sitting there so innocently on the ledge by the window, as if the dead lady herself had wanted us to find it. Aliza spied it first. I was finishing up going through her desk when Aliza called me over. From rifling through her desk, we had already pieced together her full name, that she had been a school teacher (we even found out the name of the school and how long she’d been there), her religious affiliation, what church she belonged to, what year she was married, and that she didn’t have children herself, but was an aunt and a great aunt. However, it wasn’t until we read her diary that we really got to know her.

Her office had a lovely day bed that looked brand new. In fact, I believe they wanted in the neighborhood of $600 for the whole bed and the beautiful bedspread. Regardless, Aliza and I sat down on the day bed, and while huddled together, we opened page one and began to read her tale. I don’t know how long we sat there while people came and went, but we read her whole diary. No one paid us any mind; it was as if we were invisible. Invisible to everyone shopping, perhaps, but something tells me we weren’t invisible to the spirit of Betty.

Her story isn’t that remarkable. She was an average person. She married, taught grammar school, she and her husband grew older, he got sick, she took care of him, he died, she retired, she participated in church activities, and then she got sick and obviously, she eventually died. In her diary, she talked about having difficult relationships with both her mother and her husband. She took care of both of them before they died, at different times in her life. She related how she’d had dreams of doing things in her life beyond teaching school and being a wife. She had wanted to travel. Alas, that had never come to fruition, and her sadness and regret at having others make those choices for her were very poignant. She wrote of how she had given up her dreams for the dreams of her husband.

Aliza and I talked for a long while about our dreams, and what Betty would advise us if she were with us in person, rather than just in spirit! We read about her emptiness at never becoming a mother. It echoed so sadly from each page, and caused me to want to hug and envelope each of my children like the gifts that they are. There were things she said about making peace with troubled relationships before it was too late that Aliza and I identified with. She presented these struggles, all laced with a sense of hope and positive growth, and it touched Aliza and me very deeply. She had written things that seemed to be speaking directly to us and our hearts in such a relatable way. One of her last random quotes was how important it is to grab each day and make the most of it.

After reading her diary, we sat there for another forty-five minutes or more just talking about Betty—a sweet, but lonely, childless Catholic lady who had died alone—so different from us—two Orthodox Jewish mothers so intertwined with family and community—and yet, what she had to say applied to our lives and what we each were going through. It was strangely cathartic. Suddenly, buying things from the sale no longer seemed so wrong. In fact, it seemed holy and right. I wanted more parts of Betty; I wanted things to remember her by. I wanted mementos from her and that amazing experience!

Aliza and I made another round through the house with newfound eyes. We chose objects to cherish Betty by. I purchased three lovely quilts that I use for my Shabbos guest room, and when I get compliments on them, I tell people I received them from a dear friend.

Some may think it quite ironic that Aliza and I credit a woman who we have never met as one of our dearest friends—a friend who taught us so much about life one random cold, gray day. But of course, we know better. There is nothing ironic about our tale. It was the hand of G-d that brought all three of us together that day. Aliza and I talk about Betty once in a while, and we bless her soul for the lessons she taught us from beyond the grave and for the priceless gifts she left us.