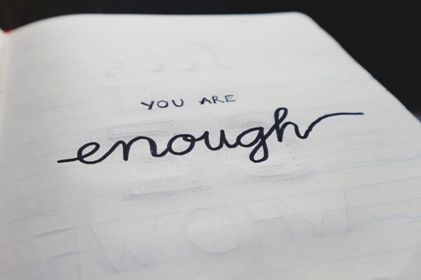 The truth is, I wasn’t cursed with those emotions. I wasn’t too much. I wasn’t obsessive because I was out of control. I didn’t need to numb myself. There was really nothing wrong with me except for the fact that I was codependent. Which means that I got all my value and self-worth from others. It meant that I didn’t trust my own thoughts or feelings, so I always turned to others because I was sure they knew better. It also meant that no matter how strong I appeared on the outside, I was not, in fact, strong. My constant worrying over others’ opinions or actions was really just my need for control, because I truly believed that if I didn’t worry about something, then it wouldn’t work out for me. The only way I felt safe was if I could control everything and everyone around me. I thought that if I appeared strong, then I would have the power to prevent being hurt. Nothing was further from the truth.

In reality, my need for control and obsession was what made me unsafe. It kept me tied to people who treated me poorly. It prevented me from feeling happiness or joy. It held me back from actually living, and it almost destroyed me. My struggle for control actually made me lose total control over everything. It pushed the people I cared about away, and it brought some very toxic relationships into my life. It caused me endless pain and suffering. I was only attracting people who enabled me to continue in the cycle of the self-fulfilling prophecy that I was just too much and not enough all at once.

It took a lot of self-work and ups and downs for me to face my codependency head on and get the help I really needed. There were a lot of steps forward and then back until I found real balance. Finding that balance, learning to trust myself and learning to heal has been the most powerful experience. It has not only given me the freedom that I had always craved, but it has also helped me to realize that what I thought was my biggest “curse” was actually my greatest blessing. Feeling everything “too much” has led me down a path in which I’m able to help others heal. My emotions help me understand people on a whole different level. Being “too loud” and “too dramatic” really just means that I’m passionate about things that are important. This experience has also helped me become a public speaker, so that I can help others who feel like they may be “too much and not enough all at once”.

Today, I help others heal from their codependency so that they can have healthy and fulfilling relationships with others and themselves. I would never have gotten where I am without my “curse”. Now, when I hear my clients tell me that they are “cursed” with this feeling or that feeling, I smile, because I know that what we think is our “curse” is oftentimes our greatest blessing. I’m living proof of that.

If you find yourself constantly seeking validation from others, questioning your own thoughts and opinions or feeling obsessed with trying to control others’ actions, you may think you’re going crazy, but the truth is you’re not crazy—you may just be codependent. You may be conditioned to believe that if you aren’t perfect then others will leave you. This can cause you to feel the need to constantly give of yourself until there’s nothing left. This can also cause you to have no boundaries, because you believe that if you set boundaries you won’t be loved for who you are. You may be so convinced that the only way to keep others around is to try and control them through manipulation or guilt.

The only way to heal from these behaviors and build healthy and stable relationships is to face what’s really going internally. You have to first start by rebuilding the relationship you have with yourself. You have to see yourself as worthy and get the help you deserve. For a codependent, looking inward can be so painful, as it’s so much easier to focus on others than to face what’s really going on within yourself. However, once you face your codependency, the healing process will open doors you never imaged. It changed my life, and it can change yours.