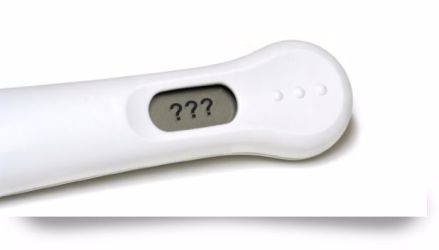 I’m 40+, nursing, and using meh birth control. When I don’t get my period, I’m at a stage in life where I wonder: Is it the nursing, am I pregnant, or is this…dare I say…“the change”?

This time, I haven’t gotten my period since Yom Kippur. We just celebrated Shavuot, so that’s…let me count backwards…nine months ago. A pregnancy of menopause, is this?

I can’t tell you how many pregnancy tests I’ve gone through. Thank G-d the mikveh sells them at 3 for 10 shekel. They’re leftovers from some fertility-testing supplies distributor, and They.Are.Cheap. Nowadays, I don’t go to the mikveh to dip—I go to buy pregnancy tests. Just to make sure it’s what’s dubbed a BFN on the TTC sites. (Big Fat Negative, Trying To Conceive.)

My youngest is over 3.5 years old. He’s most likely our last child, so I keep nursing him. At wake-up and night-night times. All the others were weaned by a year, maximum two, because my body wasn’t doing the get-pregnant-while-nursing thing, and we always wanted another. So I’d wean in order to conceive. But not this time. We’re too old, and five is a good number for us in our 40+ness. Four girls, and then the cherry-on-top boy. Everyone healthy, overall happy, active, and learning Torah. All born in Jerusalem. Baruch Hashem until 120.

I go for blood tests. You know: estradiol, progesterone, FSH, LH. Nothing conclusive. Since I’m nursing, even if I go a year without a period, no one will officially say I’m in menopause. (To be sure, the lead-up to menopause is called perimenopause, but who actually knows this before Googling it? Colloquially, it’s “going through menopause”.)

With so many women giving birth in their forties, I’m figuring that nursing-while-in-perimenopause is a thing. Yes, I’ll go for further testing to rule out other female causes, but my instinct is that all’s fine, and this is probably the beginning of the end.

An end I find hard to accept. What, I’m no longer fertile? What, I won’t nurse another baby? What, I’ll soon lack the excuse that I have small kids so I can’t daven in shul, work in-house instead of from my house, or submit taxes without an extension? Even if we say we don’t want more kids (yes, we consulted with a Rav—at our ages, with a girl and boy, there’s certainly justification to prevent it, blah blah), I still want the option. I don’t want it decided for me.

And it’s more than that. I’ve had my period since I was twelve. That’s a lot of pads/tampons/menstrual cup usage. That’s a lot of twenty-eight-day cycles of ups and downs. And having been married for over 17 years, that’s a lot of mikvehs, even without the “periods without periods”, i.e., pregnancies and breastfeeding.

I do feel a difference, though. Low energy, slow metabolism, and a laughable memory. But maybe that’s because my husband and I have the bad, internet-influenced habit of going to sleep at 2:00 AM. And with the 3.5-year-old waking us up at 6:15 AM, that’s not enough sleep. So again, no proof it’s menopause.

In any case, my single friends, who are the same age as me, also say they feel different. They travel in Israel or Europe and say, “It’s not like backpacking in your twenties.” So maybe I can’t chalk it up to being a sleep-deprived, working mother of five and wife. It’s middle-aging. And still, not necessarily menopause.

I’m scared of menopause. I don’t want it to come.

So, I’ve resolved to think of “the change” as my ability to change what was integral. What very much defines femininity. We are, in so many ways, our periods. Whenever I’m in official menopause, I know what I’d like to do: A mikvehpause. To visit the mikveh as a segula for a good next phase of life. A new Breishit. I might even go once a month…

P.S. Hashem is hilarious: The morning after I submitted this piece, I kid you not—guess what I woke up to?