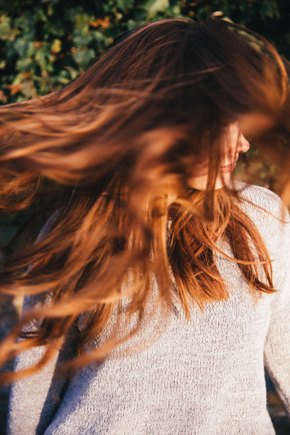 I have never been a morning person. The obligation, as a mother, to not only get myself out of bed, dressed, and on my way, but to also do this for two less-than-compliant offspring, sometimes seems unreasonable. There’s the reminding, the cajoling, the arguing, the shouting upstairs that “we are late, get down here!”, and the packing of various foodstuffs.

So there I am, trying to employ every reasonable strategy to get the children out the door. In this state, I start assisting with tasks they can, and usually do, for themselves. I will bend over to grab a shoe, or pick up a something or other that needs to go into a backpack, and that’s when I get blinded by a wave of hair covering my face. No matter how I angle my head, or lean, or reach my arm, the curtain of sheitel hair cannot be avoided. It’s the morning’s parting salvo to my equilibrium. It almost makes me want to tear my sheitel out, but I don’t because those clip combs really hurt when they pull your hair, and I really just want to leave the house for the day!

Somehow, the kids eventually get it all together, and we are on our way, with me attempting to tuck the sheitel hair behind my ears, where it will stay for approximately five seconds.

Eleven years into my marriage, I am still a bit clueless about sheitels. Really, it’s an extension of my being inept at hair-styling and cosmetics in general.

The women in my family have traditionally been minimalists with make-up and hairstyles. We are all about wash and go. My general incompetence with hair-styling was not much of a problem in my single years since my super curly, ultra frizzy hair stubbornly refused to comply with most styles. I would wake up with an Albert Einstein-like mess of hair, moisten it with water, brush it into submission and then apply liberal amounts of product before pinning back part of it or making a ponytail. Voilà, ready to go.

One of the unappreciated perks of my natural hair is that, with all its volume and desire to defy gravity, I never had to worry about it falling into my face. It just didn’t do that.

Before I got married, and embarked on the world of sheitel-wearing, I had a few thoughts about hair covering. If I got a sheitel, I wanted it to look as natural as possible (i.e. close in appearance to my real hair), and mostly, I thought, I would be more of a hat and tichel person.

There were a few complications to these ideas. One was that I realized that tucking my frizzy hair into a hat was more challenging, less flattering, and less comfortable than I had anticipated. Somehow I had forgotten that, since childhood, I have never enjoyed wearing hats. Also, even though I have complicated feelings about my own hair, I didn’t want to chop it all off just for the sake of making hats fit on my head.

Since my ineptitude with cosmetics extends to fashion, I soon realized the challenge inherent in accessorizing with scarves, let alone tying them in elaborate ways. As a result, I became a devotee of the pre-tied tichel. While these handy scarves are comfortable and stretchy, they are not made for the professional world or dressy occasions. For those, I needed a sheitel, which I acquired before getting married.

After a lifetime of taming my natural locks—a task that would by necessity continue since my hair had to fit inside a sheitel and wouldn’t feasibly do so without the wetting, brushing and product routine—I decided it would be nice to wear hair which was easier to brush and less susceptible to becoming frizzy at the slightest hint of humidity. My first sheitel was wavy, and subsequent ones have been straight. They conform with my no-fuss preferences, even though they are very different in texture from my own hair, thus defying that naïve desire to look as natural as possible.

A few months after my wedding, I landed an office job for a big company where I felt most “normal” and “professional” by inconspicuously wearing someone else’s hair (oh, the ironies of frum life). I am not one to draw attention to myself, and at work, I wanted to be able to focus on work, and not have to explain my head-coverings.

So, my sheitel went from being an accessory for special occasions to being part of my daily ensemble. These straight and/or wavy sheitels have the inconvenient habit of periodically getting in my way and covering my face. As a lifelong no-nail polish, sensible shoe-wearer, the challenge of being inconvenienced by something I wear to look pretty is still a bit exasperating to me. On the bright side, during the work day, in which I perform mostly sedentary tasks, I almost never think about the wig on my head. I barely notice it. But the moment I need to do something practical, the cascade of hair is there to remind me again that I am higher maintenance than I would like to be. (In case you are wondering, I do sometimes use barrettes or bobby pins to keep it out of my face, with mixed success. And yes, I could get a short-haired sheitel, but I like having a longish one, so all of this drama is really self-inflicted.)

I have mostly gotten over the impostor feelings I had about wearing a sheitel when I was first married, though I still feel a bit like a faker to be tossing a head of wavy tresses while, unbeknownst to people who did not know me in my single days, underneath I am harboring my old frizzy mop. Even now, I feel guarded when coworkers talk about styling their curly hair since there is a serious disconnect between the hair I show on the outside and the hair I hide underneath. It’s a bit like living with a secret identity. I suppose that contributes to the “mystery” many people associate with hair-covering, although my mystery is more Encyclopedia Brown than film noir.

Lately, though, I’ve come to realize I’m covering up something else: my age. In the last couple of years, my hair has begun graying. It’s still predominantly brown, but little by little, white hairs are emerging. Far from mirroring my natural condition, my sheitel remains solidly brown.

True to the wash-and-go ethos of my family, I don’t have plans to color my natural hair, and after all, I can’t imagine devoting even more time and resources to hair management. But, the disconnect between the outside me and the inside me is still there, and even more pronounced than before. Now it’s not just straight versus curly, it’s presenting myself to the world as more youthful than I truly am.

I suppose I can console myself with the knowledge that I will have wrinkles in the future to reveal my true age. For now, I can slip on my fountain of youth in the morning and remind myself that sheitel vision is a small trade-off for all the benefits of looking good with minimal effort. And, also, how fortunate I am that this minor inconvenience is my primary challenge in fulfilling the mitzvah of hair covering.  I can live with that.