The week leading up to Matan Torah had a packed schedule. Each day was slated with specific preparation for The Big Day—the Giving of the Torah on Mount Sinai.  The Jewish People arrived at Mount Sinai 6 days early to set up camp and step into their destiny.

If I were scripting the movie, I would imagine a scene where the Jewish People slowly flood into the Sinai desert, encircle Mount Sinai to pitch hundreds of thousands of burlap tents, and set the whole montage to swelling, epic music, mist floating in the air, white doves circling overhead—you know, a lot of biblical hoopla.

But on the day of the big arrival at Mount Sinai…..nothing happened.

Not even a speech.  Nothing.  All we know is that the Jewish People arrived and camped with complete unity.  Very beautiful.

But a little anticlimactic, no?

A quick look at the text should leave any thinking reader scratching her head:

•   We have been counting the 50 days from the Exodus from Egypt to the Giving of the Torah, with great anticipation.  (Leaving Egypt?  Read about it.  A lot of hoopla.)

•   And on Rosh Chodesh Sivan, the day they arrived at Mount Sinai, there is no opening ceremonies, no gracious welcome.  Nothing special is planned??  It just doesn’t fit.

Actually, we learn that something special was planned.  It was a day of a planned pause.

The Gemara in Shabbos relates about that day of arrival: “Moshe said nothing because they (the Jewish People) were exhausted from the journey.”

Why be silent?  What’s the purpose of silence?

There is a power to silence.  Just like there is a pause in a dance that is an integral part of the choreography, saying nothing says something.   And on that day, the Jewish People needed a pause in the dance.

In order to hear the truth, there first needs to be a space, so that people can empty themselves out, to become that blank slate upon which the truth can be written.

The Jewish People were about to receive the Ultimate Truth of All Time.  The prerequisite was a day of silence.

Because in life, we rarely get that pause.

Do you know that you have a voice in your head which is constantly talking to you?  Right now, some of you are reading this and nodding in recognition, and some of you are thinking, “Voice?  What voice??  I don’t have any voice.”

And that is The Voice.

So we don’t just hear “the truth”.  We hear our version of “the truth”.  Our experiences and our biases and our subjectivity and our agendas all affect—and sometimes twist—the truth to fit whatever we need it to say.

On September 11, 2001, there was a personal growth seminar taking place in Hawaii.  After hearing of the attack on the Twin Towers, they didn’t know whether to continue the seminar or not.  9/11 was a shocking national tragedy.  Was it respectful to continue as if nothing was happening?  Some of the participants were from New York, or knew people who were.  How could they ignore their pain and the pain of the country?

After deliberating if or how they should proceed, they decided to integrate the unfolding tragedy of 9/11 into the seminar.

The leader asked people to share how they were feeling.  Some admitted they felt scared.  Others were angry.  Some were lonely.  Sad.  Helpless.  Vengeful.  Guilty they weren’t harmed when others were.  There were almost as many emotions as there were participants.
It was suggested that the people who felt angry….always felt angry.  That was how they reacted to most stressful situations, be it tragedy or traffic.  The people who felt helpless…always felt helpless, whether they were or they weren’t.  The guilty people felt guilty and the sad people felt sad.
And people began to realize, it wasn’t the tragedy that was causing their reactions.  It was the voice in their heads.

Before we can hear—really hear—the message of the Torah, we have to first quiet the voice in our heads.

There has to be a pause in the dance.

And that is why last week’s parsha starts out, “Vayishma Yisro,” “and Yisro heard.”

Yisro is mentioned at the beginning of the parsha that will record the giving of the 10 Commandments (and he even has the parsha named after him), doing exactly what the Jewish People are going to need to do—Listen.  On all 3 levels.

The Jewish People hear G-d’s invitation to receive His book and answer the only way that makes sense, “Naaseh v’Nishmah.”  We will do, and then we will hear.

The classic question is asked—how can one do before one hears?  The answer is that it’s referring to a deeper level of hearing.

1—Of course, we will first have to physically hear the directions in order to do them.

2—But what if we don’t fully understand why G-d wants us to do this?

3—Are we committed enough to perform mitzvos, even when we don’t fully get it?  Because you can’t go on strike every time you don’t understand something.  That’s not a functioning society; that’s anarchy.

Once we had a pause to consider the reality of what was about to happen to us—that G-d created the Universe, wrote an instruction book for it and now wanted to share it with us, our collective answer was, “Naaseh v’Nishmah.”  What other answer could there be? 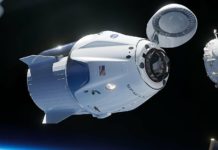 The Docking of the Dragon