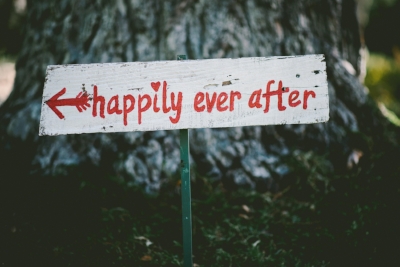 My husband and I have been through a lot. Between the two of us, we could write an entire book. With complete thanks to The Creator, we got married this year in Kislev, but like many others, the road to finding our ‘beshert’ (intended one) was not always joyful or exciting. For many of us, it’s emotionally excruciating, mentally exhausting, completely draining and downright torturous.

My husband grew up in a very loving religious Christian home. He never watched Disney movies, never heard hip hop music or defiled his language. He attended church with good people, three times a week, and gave Bible study lessons when he was only fourteen years old. Today, over two decades later, he is a Jewish man, devoted to serving Hashem. That change took time and required courage, perseverance, dedication and a lot of ’emunah’ (faith).

He only began to look for his ‘beshert’ at age thirty- two.

The process of conversion into the Jewish covenant is difficult. Integrating into a Jewish community, and finding friends and kindred spirits, is no less of a challenge. Relying on the ‘chessed’ (kindness) of his new Jewish friends to assist him in finding a wife, he never suspected that he would be taken advantage of in the worst way. That he would be lied to and cheated. To be set up with a seemingly sweet girl, just to find himself in the beis-din (Jewish court of law) giving a ‘get’ (divorce) a few horrible months later, was a blow to his heart. It was a test fit for a son of Avraham Avinu, and my husband’s will to connect with Hashem, and his trust that Hashem was only gracious and kind, was being stretched to the limits.

Now, to embark on another journey of healing and building himself up again, and finding the desire within himself to marry… that process did not happen overnight either.

I was raised in an observant Jewish home. Happy, healthy, loved. I was on the regular religious track.

When I was fourteen, I had my first exposure to mental illness, in a person close to my heart. My serene teenage world began to unravel at the seams as darkness consumed this dear person, and I watched them transform from my kindred spirit to a tortured, dead-eyed zombie. Then, again, when I was eighteen, my world turned upside down when I was forced to watch helplessly as another person who was close to my heart broke, and suffered, as they were consumed by an eating disorder, sexual abuse and the evils of psychiatric wards.

An emotional wreck, I staggered onward along my track, never showing outward signs of dysfunction. I came apart when I was twenty-two, during college. While my friends were getting married and having their first babies, I was desperately grappling for happiness and inner peace. Throwing away my Torah observance, and trading it in for an extreme secular lifestyle, I felt I was able to transform myself into a new “happy” person.

Running away from yourself always catches up with you though. Finding my way back home and healing was a long, arduous process.

After renewing my connection with Hakadosh-Baruch-Hu, I wanted to build a Jewish home. I entered the world of dating.

Oh, the dating. Falling in love with an amazing guy, knowing deep down that he is mine, only to hear that he isn’t interested. Having that happen more than once. Breaking someone else’s heart. Hopes being shattered. Working to support myself. Living with roommates. Trying every day to keep a healthy mindset and not lose hope. Believing I was not too ugly or too fat. Believing I was worthy of a good husband, worthy of love, while my reality shoved the exact opposite in my face. Finding balance and fighting to stay true to myself in a world of unbalanced and frustrated singles. Desiring close friends, yet not wanting to go with the social flow of single life. Experiencing deep loneliness because of it. It was so painful. Hashem challenged me. My decisions to not compromise my true self were difficult, but worth it.

To simplify and write, “and then we found each other, magically!” would be doing a disservice to Hashem. My husband and I found each other because Hashem brought us together. However, the way in which we each dealt with our challenges was obviously something Hashem wanted from us. I believe this led us to our ability to recognize each other as one another’s ‘beshert’ once we were brought together.

The personal work we each did, in response to our challenges, enabled us to unlock the redemption awaiting us in those challenges which were sent from Hashem.

From our experiences, we would like to offer our outlook on how to handle the difficulties in single and divorced life, and explain how we managed to stay focused. We mean well, and we hope this offers real chizzuk and some guidance to those who seek it:

1) Do not compromise your true self in order to make it easier for people to set you up.

2) Seek out a Torah-infused therapist or life coach. We all need help in self-awareness.

3) My husband and I realized while we were single that if we spent most of our time with other singles and divorcees, we would stay that way.
Connect with happy families. Soak in that home energy. Get close with married people of your gender, and let them rub off on you.

4) Get ready for your marriage! Don’t wait until you’re married to make the changes you desire in yourself.

5) You have to work to support yourself, but be careful not to make your job your life. Don’t fill all your time with it. It’s tempting, but it’s an escape from your loneliness. You must work through that loneliness by making healthy connections with people and Hashem.

6) Make sure your environment isn’t draining. Take distance from surroundings that deplete you. You need to stay positive in order to see things clearly. Think of it as putting your family-to-be first. If you’re not in a good mindset, it will have a negative effect on them as well, and they are very much a reality, even though you have not been brought together yet.

7) Invest real time and effort into preparing mentally for your home, and let yourself get excited about it.

8) Make sure the people you live with and spend time with are not ‘stuck’ or too comfortable in single life. You’ll be tempted to give up hope. Never give up hope.

9) Hashem wants you to grow in order to be connected to Him in the best way for you. See every struggle and heartache as a knock on your door from Hashem, inviting you to find the growth that has been tailored to you.

10) Do not wait around! If you’re not getting anywhere with suggestions, find a new network of people. If you’re using matchmakers, be sure to choose one you feel a real connection with. Most matchmakers do not take the time to really listen, but there are some who do. Find them. Don’t give up until you have. Do not throw your money around, and also don’t be bitter about paying a matchmaker you feel good about. It’s worth the positive experience.

11) Have a mantra: “Hashem, I want to be open to the way in which You want me to go. Help me to see things clearly.”

12) Be a bit CRAZY! I told people I was getting married before my husband was even suggested to me. I knew I had to be getting married because that’s what Hashem wants.
I said, “I’m getting married! I don’t know to whom yet, but I am.” It was a mindset. It helped me to really believe it. I got excited, because it became so real. I knew that even if it took another ten years, I was still on my way to my husband.

13) Realize that you already have a husband, and you are going to marry only him. Don’t stress about that part.

14) Imagine speaking with your spouse. Imagine their good qualities. Write them a letter that you plan to give them when you get married.

15) “The List”. If you have not done this already, take that list you made that has all the qualities you wish your spouse to have, and narrow it down to two or three must-have qualities which you will respect. To help you do this, ask yourself which qualities have earned your respect for people in the past. Narrowing the list down to two or three must-have qualities will take honesty and courage and a willingness to admit that you are vulnerable. We suggest you do this with a mentor.

As an example—I finally admitted to myself the three must-have qualities I need are:
a) He needs to be American. (This one took me a lot of self-work to be able to accept and admit. Everyone has their thing which is hard for them to admit that they need.)
b) He needs to have an inner calm.
c) He needs to desire to be the main breadwinner. (I toyed with the idea of being a “Rachel” to my “Rabbi Akiva”, but with a lot of honesty and soul searching, I knew that I would not respect my husband if I had to bring home the big bucks. And no marriage can survive if you don’t respect your spouse.)

Be sure to consult your mentor about your short list. We all need guidance and a reality check. The Torah instructs: Have a Rav!

16) MOST importantly: DO NOT PURSUE SUGGESTIONS WHICH DO NOT SOUND RIGHT. You are not narrowing your chances by declining offers. You are zeroing in on your husband. You are not made of steel, and you cannot afford to put emotional effort into an evening with someone who is not right for you.

17) Daven, daven daven. Hashem should help you grow in order to be ready for him, whenever Hashem brings you together. Because when it happens, it happens fast.

Much love to all of you. Hatzlacha raba!