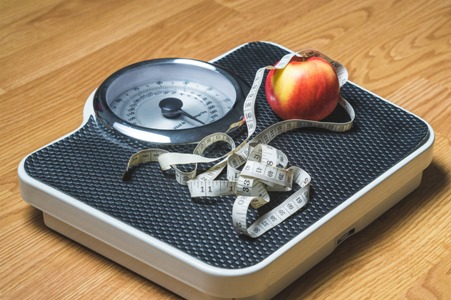 To say that she hated the scale was an understatement. It mocked the very efforts she made to extract joy and lightness from her daily existence.

The way that it harshly rebuked with ever-growing tallys of failure was excruciating to her. And what was this crime it kept reminding her of?

She wanted to explain; she needed to try.

She wanted to tell the scale that she had a soul, that she was whimsical and weightless, but that she was often sad and a little impulsive. She wanted the scale to see her impulsiveness less as a fault, and more as a feature of her personality—present and dislodgeable.

When she was impulsive, it was usually in the company of her friends; she felt buoyant and joyful with them—that was usually when the dessert on the table became something of an attraction. She, too, wanted to shove a little fork into chocolate cake with whipped cream, a giggle as she took a bite—or three—when they did, and partake of an experience together. She felt punished when she only watched, and refrained.

When she was sad, she told the scale, it was especially hard to also be hungry. And hungry is what one is on a calorie-restricting diet, so don’t even go into that topic please, she said.

She ate more of her dinner when sadness visited, because the sadness lived under the constant realization that there was suffering in the world and that she could do little about it, although she spent much of her waking, working hours trying her best to alleviate it…she tried to eat more when she was sad because it was difficult to deal with both hunger and that gnawing other hunger all at once.

Some mornings, the dreaded scale told a story of water…her fingers felt swollen and tight, and she knew that the numbers were off and that she could do nothing about it, but still it overwhelmed her; the disappointment she felt on that scale, as if it had the power to dictate to her her inner worth and value. Did the scale know that she told a good punch-line, that she lifted spirits and sang away the dark? Did the scale know that over the bridge into Philly, on her way to an appointment yesterday, she emptied her lunch bag to feed the men who appeared gaunt and cold outside the window of her car?

Did the scale know how deeply she loved and was loved by her husband, her children, her dearest ones who rarely saw what the scale did…and if they did, there was no censure or ridicule, no stressing the point.

Did the scale know that she had an independent mind; that she read, that she pondered, that she secretly wrote letters to editors and held candles at vigils…that she shared her concern, and her worry, for all the world to see?

The scale did not…