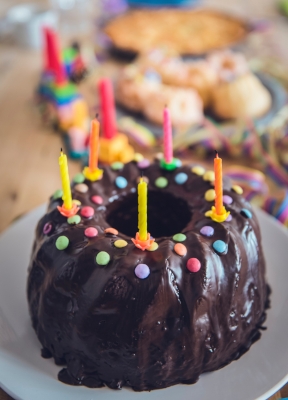 I open an email and there it is, another Evite—its cheerful green icon so full of the promise of fun. I grit my teeth and roll my eyes. It is another birthday party; it is another classmate of one of my youngest three, turning 3 or 5 or 8. Will my child attend?

I moan. Sometimes I open the party invitation right away, sometimes I save the email as unread until later in the evening. I want to be happy, I want to feel good that my children are getting included, getting invited, building up social connections, celebrating in the company of friends. But I feel a sense of dread as green color glows brightly from my screen.

How did I turn into a birthday party Grinch?

It goes back to having my first child born on the last day of Pesach. Clearly, he was not going to get a fancy birthday cake on his Hebrew birthday, ever. Unfortunately, most years, his English birthday falls out either in crazy pre-Pesach rush, or on Yom Tov itself. That set a precedent that there is no need for a party to acknowledge a birthday.

Would you believe that my second child was born two days before Pesach? A birthday party for an older brother was clearly out of the question that year, and the second child’s Hebrew birthday barely gets remembered most years. “Here we are, about to do bedikat chametz… and oh yeah, Yom Huledet Sameach! Cake?! When my house is chametz-free?” His English birthday suffers the same fate as his brother’s; lost in the Pesach preparations, or on Yom Tov itself.

To top this all off, I managed to have another April baby, and another child born a week after Purim. Out of my five children, only one has a January birthday, clear from all Hebrew and English days off, and clear from Yom Tov stress.

Over the years, I have tried acknowledging my children’s birthdays. But their friends are often away or busy with their own families. Yom Tov prep makes me stressed and not interested in planning a party on top of it. I have gotten my children presents, we have done family outings, I have allowed them to bring friends for Shabbos and Yom Tov meals as celebrations. However, they have been pining for big birthday parties, the kind that I have no desire or energy to pull off. This disconnect makes me grouchy.

The second contributing factor to Grinchness is the sheer number of children I have. Five children times many classmates equals just about every given Sunday being split up into driving one of the kids to a two-hour birthday party somewhere in town. I desperately want those coveted Sundays for family time. Sometimes siblings are invited to these parties, and I can make a family outing out of it. More often than not, a party is just for one child who might not be particularly close to this friend. I have to do an advanced calculation: on that Sunday two weeks from now, do I put my foot down and take all the kids on a hike, or do I RSVP and have four children wandering around the house, complaining how we NEVER do anything, just so that one can have two hours of fun?

The third component of Grinchness is how these invites dry up with the children getting older, and then these birthday parties become a popularity contest of which kids are “cool”. The parents are complicit in making sure that everyone who is invited not only has a good time, but notices the amount of effort and expense that went into the party planning. By the time some elaborate event is set, a headcount becomes essential and each extra guest brings the costs up. No room for siblings, no room except for the nearest and dearest. And so, unwittingly, the children get divided into the “in” crowd. The parents of the children on the outside valiantly try to set up parties, but often, nobody shows up, nobody RSVPs. The parents are hurt, the child is devastated, the birthday is ruined. There is a collective moan how nobody RSVPs any more, how people have lost common decency. The popular kids do not understand what all the moaning is about. After all, they still get plenty of invites and plenty of people show up to their parties.

On the other end of non-RSVPing parents are mothers like me, deciding which Sundays who will be driven where, what kind of logistics can be worked out, and how to balance the needs of the family with the needs of the social circle.

Can we resurrect the good old-fashioned backyard birthday party where all are invited, the fare is simple chips and cake, and the entertainment is parental stereo blaring over children running around with balloons? Can we hold parties in local parks, and make them a drop-in affair? Can we ban birthday presents, to keep the expenses and the materialism down? Can we prioritize family time over socialization? Can we make it truly about celebrating a birthday, rather than material abundance and social connectivity?

I open yet another invite and cringe. I do not want to be mean to the birthday child. I appreciate the efforts the parents went through to set up a party. If I could, I would clone myself and my kid so we could have a family outing day and attend these social functions. But I have to make choices. Is my physician husband on call that Sunday? Who will babysit the napping youngest while I drop off and pick up? How much screen time am I going to give to my other children while I drive?