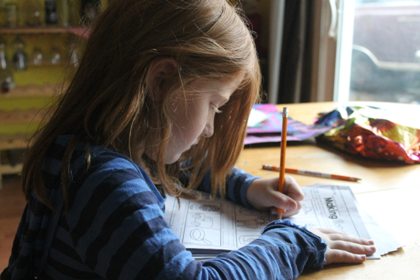 “What year did the United States take over Guam?” my daughter asked while I was contemplating nothing more taxing than whether to give away my prettiest, yet most painful, pair of shoes.

“Guam?” I asked. The only thing I knew about Guam was that it was somewhere out in the Pacific and would be impossible to pronounce if you had peanut butter in your mouth.

“I was just going to say that!” I called after her, but she was already beginning her essay on the Treaty of Paris (also 1898, FYI) while I returned to my own cost-benefit analysis of maintaining my inventory of pretty, painful shoes versus the cost of ongoing podiatric care.

This true story underscores why I agree with the educators who believe that homework has plainly gotten out of hand. They claim that excessive homework robs children of part of their childhood, when they could otherwise be doing fun things, such as planning new ways to terrorize the babysitter. But they’ve only got it half-right—what about excessive homework robbing me of my adulthood? Didn’t I already do all this work more than thirty years ago?

Admittedly, I enjoyed helping my kids with schoolwork when they were little and the questions were easy. When a kid asked, “Mommy, what’s two quarters plus three pennies plus three nickels add up to?” I could do it! When a child wanted me to help him think of homophones, like “son” and “sun”, I was there! These questions were beautiful in their simplicity. Since I could answer them easily, they boosted my self-esteem (tragically neglected by teachers in the benighted days of my own elementary education). Best of all, my agility with first- and second-grade schoolwork preserved my young children’s belief—so sadly short-lived—that my husband and I were omniscient. Those were the days.

But around middle school, the kids started demanding that we explain the difference between a cerebrum and a cerebellum, and what happened during antebellum, and what’s really bothering Rashi. If all this weren’t bad enough, they want my help with politically motivated essay assignments in which they are asked to count the ways that they  devastate the environment simply because they live, breathe, take the occasional shower and drink from the occasional plastic water bottle. While I scramble to help them find answers in their books or in our encyclopedia for homework questions, I can’t help but wonder, “Why am I not smarter than a 5th grader?”

I secretly agree with my kids when they complain that much of their homework will have little practical application to their lives as grown-ups. With no budding scientists in the family, the advanced study of mitochondria and the nervous system seems an annoying impediment to boning up on more gripping questions, such as “Why is a frankfurter called a hot dog?” and “What’s that little flap-thingy called at the back of your throat?”

But I have to pretend to be on the schools’ side, and besides, I’m a Jewish mother. So when one kid recently argued that it was a waste of his time to practice factoring trinomials, I shot back, “If it was good enough for Alan Greenspan, it’s good enough for you. You could follow in the fine Jewish tradition of being a Secretary of the Treasury, ready to dazzle them with quadratic equations and savvy management of the nation’s interest rates.” During my lecture, I caught the same kid sneaking a look at a Snapple cap, where he learned that a goldfish has an attention span of three seconds. Hmmm.

To my shame, I am utterly useless at helping with any math problem from fifth-grade or above. Those questions are met with shouts of, “When’s Dad coming home?” Once, out of sheer desperation and with their father not yet home, one son asked me if I remembered anything about multiplying radical expressions. I said, “I think there are already way too many radicals in our society, and I refuse to do anything that might multiply them at all.”

I feel sorry for my kids when I see them hunkered down over fat math books, rattling their brain matter as they must simplify equations that have mile-long strings of numbers, x’s, y’s, square roots,  and other alarming symbols. Too bad the kids can’t just do what I’d do when faced with similar problems—take them to an accountant.

Schools ought to wise up and start teaching the kind of practical problem-solving skills that will help them deal with real-life dilemmas. For example, “If the water heater explodes at the same time that the car transmission dies, which gets fixed first?”  Or, “If I can’t afford new clothes but Nordstrom is having its semi-annual sale, do I charge the clothes on my credit card or put them on layaway?”

But instead, educators are badgering kids into converting Celsius to Fahrenheit, explaining the background of the Peloponnesian War, and making them confess to a litany of sins against the ecosystem in essays.

Meanwhile, after arduous study, I have concluded that it is not worth keeping my pretty-yet-painful shoes. I am keeping my notes on this study for inclusion in the small book I intend to write one day, called “Everything I Ever Needed to Know I Learned in the Nordstrom Shoe Department.”