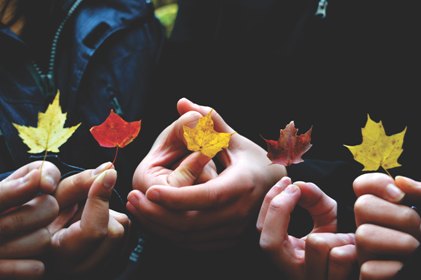 During my first semester as a freshman at Stern College for Women, I often felt as though I had been transplanted to a subculture where I didn’t speak the language. Even though they were speaking English, my classmates sprinkled in so many Hebrew, Yiddish, and Aramaic words that it often took me a moment to process what they were saying, and even then I sometimes just nodded in polite agreement.

“It’s mamash a gevaldic class. You have to sign up for it or, stam, you will be missing out. Nebuch.”

As a public school graduate from Charleston, West Viriginia, I was excited to be in a Jewish environment in the big city, but overwhelmed by all the differences. A classmate of mine, who grew up attending public school in Tennessee, was similarly baffled, and she referred to the blended language as “Heblish”.

It was a point of pride for me that, by the end of my freshman year, I could convincingly hold forth in Heblish with the best of them. But some time after that, I began questioning the authenticity of talking this way.

It was fun being able to understand my classmates and participate in the in-speak, but was it really me? After all, if Hashem had intended me to grow up in Flatbush, He could have placed me there. Instead, I grew up in walking distance of the state capitol of West Virginia, a place that many of my New York-area classmates didn’t even know was its own state. I decided that it was not my mission in life to become a pseudo FFB New Yorker but, rather, to embrace who I was. So I gradually toned down the Heblish, only using it when it felt like the natural thing to say.

Thus began the symbolic integration of my past self with my immersive Jewish self. It’s a process that goes on to this day, more than 20 years later, and which has kindled my curiosity about how others integrate changes in religious observance into their identity.

It’s why I am fascinated by women with fancy degrees who become mothers of large families and send their children to yeshivas that minimize secular education. And equally fascinated by former Bais Yaakov girls who post photos of themselves on social media in bikinis. Both of these paths are foreign to me, and I wonder how they reconcile the different parts of themselves, and whether their personal calibrations between secular and religious will continue to change over time.

There are countless books and essays about both those who discover frumkeit and those who, to whatever degree, decide they no longer feel at home within its parameters. However, the ba’alas teshuvah “success” stories tend to focus on the euphoria of finding a lifestyle that is true and spiritually nourishing, and how former reservations about Orthodoxy fall to the wayside as they become more learned. In the other direction, those who leave the fold write of feeling stifled, unheard, restricted, and, in the worst cases, abused.

Most of us, I think, live somewhere in the middle. We resonate with the beauty of the traditions, struggle with some of the specific observances, and wrestle with how much secular influence to bring into our homes.

Faced with an upcoming three-day yom tov and all of the attendant food preparation, one friend recently joked that she wouldn’t mind taking a pass this time. She wouldn’t, of course, but rather than smiling and saying “Boruch Hashem” when faced with the challenges of living a frum life, I find it validating when others can acknowledge that, despite the beauty and transcendence of our holidays, the lifestyle is incredibly demanding. Even when you are fully on board with the underlying concepts of Judaism, practicing them is not always the euphoric experience you might have once imagined. This is true for any observant person, but especially for those who did not grow up Orthodox.

On the other hand, those who choose to relax their observance of halacha are not necessarily “off the derech”. They might just be taking a different route. During my teenage and college years, when I was enthusiastically embracing a more observant lifestyle, I was somewhat over-zealous and judgmental. My sister set me straight when she told me that she also cared deeply about Judaism, even though her style of observance was quite different from mine. I learned from her that it was not my place to keep tabs on other people’s adherence to halacha. In addition to not being anyone else’s business, this type of interference often has the negative consequence of creating hurtful associations with traditional Judaism.

It’s a tricky thing to be devoted to living a halachic life and wanting to share your convictions with others, while at the same time not making them feel judged and invalidated. Various kiruv movements have developed beautiful ways of reaching out and sharing traditional Judaism in non-judgmental ways. However, establishing relationships with fellow Jews as a kiruv professional is quite different than interacting with close family and friends.

The best advice I ever heard on this topic came from Rabbi Norman Lamm, the retired chancellor and rosh yeshiva of Yeshiva University, at a talk in my college years. The best way to draw others close to Torah observance, he told us, is to set a good example. The implication of this is to be sincere in our own dedication, welcoming of others, and consistently observant of both mitzvos bein adam l’Makom and mitzvos bein adam l’chaveiro.

More than anything, it is vitally important that our close relationships not be dependent on whether the other person matches us in level of observance.

In recent years, I have read periodically about couples who married when both were frum, but in which one spouse later decides he or she no longer wants to be observant. Often this leads to divorce, but in remarkable cases, the marriage continues. I have tremendous respect for couples who can bridge differences in religious practice, and can imagine the daily negotiations that make that possible. But I also see their relationships as metaphors for how we should feel about other Jewish friends or relatives who are different from us in observance.

If you love a person, is it only because of what you have in common, or because of a deep appreciation of who the person is? Obviously, in the specific case of a marriage, the non-observant partner would have to agree to uphold some halachos in the shared home. Similarly, non-Orthodox relatives often go to great lengths to accommodate the kashrus and Shabbos needs of their frum children, siblings, or parents. Because of the importance of the relationship, both sides have to give a little to create an atmosphere that is comfortable for everyone. It’s not easy.

But shouldn’t this give and take also, on a different level, be part of our friendships as well?

The friend who resonates with you as a teenager or young adult because of your shared religious perspective may evolve into a different type of Jew.  The classmate who once covered her elbows in July may wear plunging necklines and skinny jeans now. It can be disorienting when people change dramatically, and you may wonder how much you now have in common. If your friendship was built on nothing more than a shared love of pencil skirts, then it will be difficult to relate. However, when you really have an appreciation for the essence of a person, the friendship can evolve with you, despite your differences.

When I began college at Stern, I thought of myself as having a unique background and perspective, and viewed many of my classmates—mostly day school and seminary graduates—as being more monolithic in their thoughts and experiences. Over time, I saw that my classmates’ hashkafos were always more diverse than they first appeared, and have evolved over the years, often in unexpected ways. While I may not understand the paths that some have chosen, I try not to judge them. Mamash, that’s the emes.