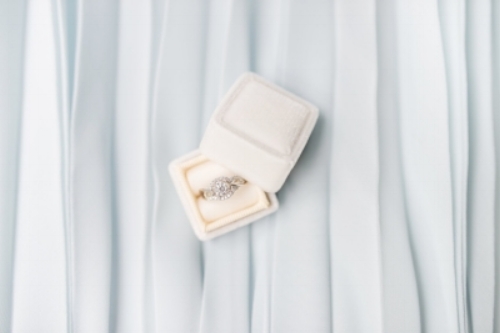 Tonight is her moment.  She stands, smiling, next her chosson, as the photographer tries to capture the image.  Her chosson is a grandfather three times over and looks it, but she has a youthful appearance, albeit a few soft wrinkles around her eyes.  You can tell she was never married before because she doesn’t wear a sheitel, and that makes her look so much younger than the man she is engaged to.

The vort is understated.  There are no young girls squealing in delight at their friend’s engagement.  Instead, she is met with women who are marrying off their own children at this time in their lives.  These are her friends.  Mothers with many children, grandmothers even, busy with their hectic lives.  They are too old to scream like little girls.  She, herself, doesn’t seem overly excited about her simcha.  She is calm and collected, bogged down by years of attending other people’s simchos and feeling the pain of always coming alone.

Why was she single for so long?  It wasn’t because she wasn’t a good girl; she was the best.  It wasn’t because her family didn’t have yichus or money; they had both.  They were known to be the most giving, sincere family in their entire community.  She was single for so long because that is what Hashem wanted, and nothing she could have done would have changed it.  Getting married and finding “the one” is as difficult as the splitting of the Red Sea.

Years of trying to lose weight and look put together didn’t do anything to help her feel less lonely and more accepted.  She once told me that when her youngest sister by 10 years was getting married, she cried as the makeup lady was doing her face at the wedding, as she was now the last one left unmarried.  Watching your siblings get married, one after another, can become the most heartbreaking moment when you are years older and have nothing to show for it.

Her mother once opened up to me about her struggles as a parent of a single child: “I would give anything to have her married, Goldie.  I don’t care who he is or where it will take her- just as long as she’s happy and married.”

I looked at her mother then and was saddened that there was nothing that I could do for my friend or her mother.  All I could do was write her name bas her mother’s name and daven for her every day.  One time, I was staying with them for Shabbos, and her mother opened my siddur, thinking it was hers.  She came over to me when her daughter was not there and told me quietly that her double name was reversed.  She told me the correct way to say her name, and I nodded quickly.  On Motzei Shabbos, I wrote her proper name in my siddur.  But it would be years before I was to attend her wedding.

She always dreamed of having a child.  She used to call me her child because she was mekarev me and felt like she gave me my spiritual life.  It was awkward when I got engaged.  I looked at her as if she had everything and I had nothing.  She was the one with the frum family, and I was the one from a divorced home, with not a penny to my name.  Yet, here I was, a mere child, at 22, standing next to my chosson, surrounded by my friends.

When she got married, she inherited a family of 5.  These children were missing their mom and were reluctant to give her a chance.  They shut her down before she was even able to show them who she really was- a kind, smart woman who was closer to G-d than many of us are.  Her years of being single did not erase one iota of her frumkeit.  She remained like a picture set in stone:  same smile, same length skirt, and same shoulder length hair.  Seeing her was like being transported to the days when we were young and careless.

With so much change going on around us, it was hard to imagine a person who remained so focused on her faith.  Rosh Hashana and Yom Kippur found her in the shul by every tefillah- shacharis, mincha, and maariv.  She would sit in the back with all the girls that she was mekarev, showing them what the men were up to downstairs.  She davened with the most kavanah that I have ever seen.  While everybody was getting the smartest phone and the latest computer, she still had a flip phone that barely received text messages.  Nothing swayed her.  She is the strongest person I know.

When I got the text that she had a baby, my mind was blown.  That was a simcha that even I squealed about.  The child looked heavenly and when I spoke to her later that day she said, “Hashem never forgets anybody.” My faith was lifted to a place I only remember feeling as a child.  It was such an inspiring story that in the aftermath I kept saying it over and over to everyone that I knew.  And just to prove it, I would show them the picture of the baby on my phone.  I even had it as a screen saver for a while just to remind myself that no, Hashem doesn’t forget.  For some people it just takes longer, maybe even a lifetime.

Being single in the frum community feels even more isolating than in the goyish world.  The frum aim to marry and have children and build up their families.  It is a mitzvah in the Torah!  So, while everyone’s lives are changing, the single girl remains frozen in time.  The amount of weddings that a frum single girl has to attend is staggering.  It is no wonder that the wedding halls have to be booked months in advance.  There are so many people getting married, they keep building new ones just to keep up with the flow.  And just imagine how it feels to sit in the audience, time after time after time, hoping and hoping for years on end that it will finally be you walking down that isle.

The pain doesn’t end there.  After the weddings come the brises and the kiddushes.  The bar mitzvahs and birthdays.  Family pictures hanging on the walls of all the siblings with their children.  Letters coming in the mail with your parents’ names and then just your name after, as a side point- a subtle reminder that you don’t have a husband to share an envelope with. All the yomim tovim find you in the kitchen, cooking for hordes of people, if you are lucky enough to still be living with your parents.  Many singles feel that they need to move out and do so, leaving them alone on Shabbosim and yomim tovim.

For some reason, the girls that remain are always the top girls- the most talented, the kindest, those with the biggest hearts.  There is no explanation that there are more eligible girls than there are boys.  This is known as the shidduch crisis.  This is why you often see a single girl who has never been married, engaged to a newly widowed man with a family.

There is a fine line that we walk, trying to keep these girls included, but not hurt them at the same time.  A simple picture of your adorable child can be like a knife stuck into the single’s heart.  I know that it’s got to hurt, but I work hard for it not to be awkward.  So I just keep talking nervously, while showing a single friend the pictures on my phone.  In her eyes nothing I complain about is note-worthy, because she would die to be in my shoes.  She would easily take my problems, just to have a husband.  Just to hold a newborn child that is her own.  No matter how flawed the package may be.

There are many stories that do not have the happy ending that I began this article with.  Not yet.  And my heart aches for all those women left with the raw end of the deal.  We can try to help, we can try to encourage, we can set them up and try to think of ideas for them.  But in the end, it’s up to Hashem to make the shidduch, and we don’t always understand His plans.  I often look at the picture of my friend’s child, and my emuna soars.  I hope by sharing this story I can give chizzuk to anyone who needs it and hope for all those who are waiting.  Your time will come.  B’Shaa Tova.