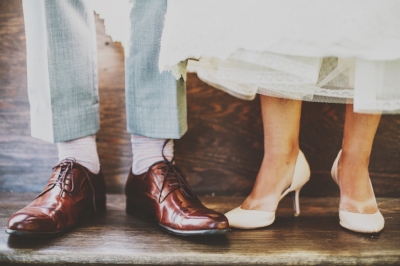 From the time we are put into uniforms in first grade, there is one theme that begins coming at us from all directions: tznius. Yimei Iyun, special shiurim, lessons interwoven into our daily curriculum all begin to impress upon us, as young women, the importance of covering up. Whether or not this should be such a central focus of our chinuch, there is a consequence of all this “modesty” messaging that it’s time we addressed as a community. What happens when a young woman gets married and is expected to take it all off?

I did not grow up in the most sheltered home. Questions were encouraged and answered in the most age-appropriate way. Asking for this kind of information wasn’t a big deal in my family. My mother is a biology teacher, so the discussion of bodily functions was always very matter-of-fact and scientific.

By the time I was in kallah classes at the age of 22, I definitely knew the basics. I was surprised when my kallah teacher began Sex-Ed 101. I stopped her after about one minute. “It’s ok, I know the mechanics.” So she moved on. We reviewed the halachos of Taharas Hamishpacha, she gave me a complementary pack of bedikah cloths, and after eight sessions, she sent me on my way.

But I wasn’t really prepared. Knowing in theory how it all works is not enough when it comes time to put it in practice. There’s a whole chapter that was skipped in my kallah classes, one that I believe is not spoken about in general, and that is the topic of pleasure. For a woman to know what will make her feel good, she needs to be able to explore and feel that it’s ok to do so. The first time (or maybe two or three times) is going to be awkward for any couple. But this lack of discussion of personal pleasure, especially for women, is a real problem.

Several years ago, when I was working for the Orthodox Union, I had the privilege of staffing a program called the Marriage Enrichment Retreat. It was a fantastic event, a weekend retreat for couples only (no kids allowed), with an incredible line up of speakers giving classes on various topics related to marriage. I was at a women-only intimacy class, which was addressing the topic of pleasure. Questions had been sent to the speaker in advance so people would be more willing to raise sensitive issues. There was one question that I remember in particular. The woman had been married for 13 months, and she still didn’t “get what all the fuss is about” when it came to intimacy.

The idea that physical pleasure between a man and a woman is something to be ashamed of is a Christian concept, not a Jewish one. When the Jews were in the desert, Moshe Rabeinu’s sister, Miriam, was plagued with tzara’as for speaking about him to their brother Aharon. Miriam noticed that Moshe’s wife, Tziporah, had stopped concerning herself with her appearance. When pressed for a reason, Tziporah said that it was because Moshe had separated himself from her, permanently, to always be in a pure state and ready for the word of G-d. Miriam felt that since she and Aharon lived normal marital lives, although they too were prophets, there was no reason for Moshe Rabeinu to be doing this. And if it weren’t for the fact that Moshe was a complete exception, Miriam would have been right. (As it is, we do not see this practice with any other great Biblical figures.) Even the holiest among us are meant to experience physical relationships with their spouses.

Towards the end of my senior year in high school, my principal gave what many graduates refer to as the “Chocolate Cake Speech.” It was her introduction to the concept of Taharas Hamishpacha. The gist of her speech was that too much of a good thing can be bad. You may love chocolate cake, but if you would eat it all the time…Looking back on that speech, I wonder at her furthering the notion of abstinence. We were 17-year-old Bais Yaakov girls. We were solid on that front.

We are doing a disservice to women (and to their husbands) if we don’t talk about pleasure. We need to discuss why it’s important, how to attain it, and how to provide it. Will most women figure it out eventually? Maybe. But maybe, like that woman at the marriage retreat, they’ll go 13 months or more and still not have experienced the pleasure of physical intimacy.

We’re not talking about starting up a hashtag to get the topic trending all over the internet. We still believe the words of the navi, “V’Hatzneia leches im Hashem Elokecha- the modest walk with G-d.” There is a time and a place for this discussion, but when and where? As the saying goes- two Jews, three opinions. There’s no one size fits all scripted discussion. But we need to help young women make that paradigm shift as they enter the dating process and ultimately get married. There’s no reason for them to be dreading their wedding night. Physical intimacy is essential to a marriage as another form of communication between partners. Let’s make it standard to provide young couples with the tools to communicate and build strong, healthy, loving relationships.