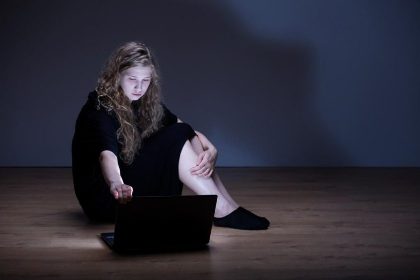 Cyberbullying should never be tolerated.

When we see someone being cyberbullied, we shouldn’t assume they’re fine and can take it. We shouldn’t have the attitude of “Well, you put yourself out there publicly…obviously you’ll get some negativity.” A negative “I don’t like your shoes or haircut” is very different from “You should commit suicide” or “Please do us a favor and commit suicide.”

I’m sure some of you are thinking, “Well, that escalated quickly.” To be honest, it didn’t. This conversation should have happened a long time ago. We grow up saying this rhyme: “Sticks and stones will break my bones, but words will never harm me.” We grow up preaching a straight-out lie. Words will never harm me? HA!! Sometimes, words cut deeper than a knife.

Being a blogger who puts herself out there, I’ve received my fair share of comments from bullies. I’ve gotten remarks that my sheitel is ugly or that I am the reason Moshiach isn’t coming…and ones telling me to kill myself. I can handle the first two types of comments. But when I receive a comment like the last one, it hits me hard.

I used to immediately fall straight into this dark place, questioning the value of my life. I mean, a complete stranger just sized me up based on minimal information, and hates me enough to want me to die. I don’t know anyone who can seriously dismiss a comment like this the first or second time around. It lingers in the back of your head; you don’t just forget someone said something that drastic to you.

When I get comments this mean, I usually don’t have the energy to discuss them publicly on my Instagram account. I just feel like it would be a pointless and endless discussion. However, a situation which occurred to a different blogger over Pesach changed my mind. I was scrolling through other people’s stories when I came across the story of one of my favorite people to watch, Annette from @esteezonline. Annette is a powerhouse of a human being. Annette is kind, full of positive energy and always shares her truth with her followers.

This particular story had me fuming, and Annette was also furious about what she was discussing. Elizabeth Savetsky, formerly known as @excessoriesexpert and currently known as @elizabethsavetsky on Instagram, was told by a follower to commit suicide. Elizabeth is a warm, loving, energetic mother of two. Over this past year, Elizabeth has shared some of her personal hardships with her followers, showing that she, too, has dark days.

When I watched Annette’s story, I immediately had to story about this situation as well. What bothered me the most, other than the actual comment, was that to my knowledge, Annette and I were the only two people who publicly stood up against the cyberbullying.

We need to be so careful with our words. We need to publicly show support to those who are being cyberbullied and stand up against it. You never know what an individual is going through behind closed doors. Some people—especially those who are used to being in the spotlight—can fake a smile perfectly during their darkest days. For many of us in the spotlight, it’s currently our job or becoming our job. Just like one is expected to leave her baggage at the door of the office, we are expected to do the same when we come on camera. You have no idea if someone is already having suicidal thoughts. You don’t know if she has just gone through one of her hardest days. By telling someone she should commit suicide, you may be encouraging thoughts she already had or instilling these thoughts in her mind.

When I heard about this comment, I felt as if someone had said it to my sister. I broke down, imagining hearing that any of the wonderful people I know via Instagram, who put their lives out there in hopes to inspire and help others, committed suicide because someone told them to or encouraged them to. I would feel a deep, personal loss.

Cyberbullying doesn’t just happen to bloggers or public figures, and it happens to people of all ages. Please take a stand when you see it happening. I know how hurtful it is from personal experience and from seeing people publicly stand against it—those who know me personally and those who don’t—and they assure me that I am not alone. When you hear such harsh words, whether you feel them deeply or brush them off, they hurt so much less when you know that you’re part of a community which doesn’t tolerate cyberbullying—or any bullying, for that matter. Let’s make our community a bully-free zone. Be brave—defend someone if you see them being bullied.

If you are reading this and have bullied someone, I hope you have found peace within yourself and have broken this damaging habit.