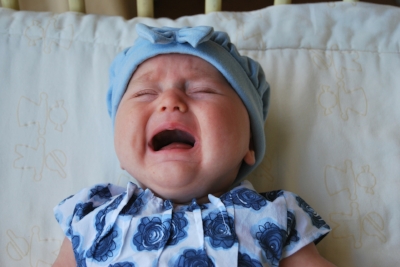 We had just spent the day at Disney World, and our 16 month old daughter was crying hysterically. She couldn’t stop screaming; the tears streaming down her face, barely catching her breath, only to let out more hysterical shrieks. I checked and changed her diaper, offered a new fresh bottle, bathed her, undressed her, changed her clothes, put on the TV, but nothing worked.

An endless frantic hour passed by, and then another, and another, while my husband and I desperately tried to stop her crying. Finally, a thought struck me. She almost certainly had an “Aiyen Hora” (the Evil Eye), probably placed on her by a fellow Disney attendee! Her cherubic toddler face must have elicited the worst of envy, and now, her hysteria was caused by the Evil Eye’s malfeasance, while we sat in the Gaylord Hotel. There was only one option. I carried her into the bathroom and locked the door. Then, with a heart full of love and a mouth full of saliva, I viciously spat at her three times, right in the forehead.

“What are you doing in there?” My husband banged on the door.

“I’m fixing our daughter! Leave me alone!” I shouted back.

My daughter stopped crying, my spittle dribbling a tiny bit down her smooth forehead. She stuck her thumb in her mouth, cuddled her sweet little head on my shoulder, and fell promptly asleep. I carefully wiped the spit up, smoothing it deep into her hairline, so he wouldn’t see it, before I opened the door to him standing right there.

“Wow – you stopped the crying! What did you do in there?”

“Nothing – just an old Chassidic trick. Nothing you would know.”

He let me pass into the floral-wallpapered room, and I placed her in the crib. She snored gently.

“You had to do something. She cried for over three hours, non-stop. You went into the bathroom, and in less than a minute, she stopped. Tell me, what did you do?”

“Howard – nothing. I did nothing.”

“You DID do something. What was it?”

“Spat? What kind of a mother are you?”

I began crying. The heat of the day, her relentless crying, his underestimation of my magic, all took a toll on me.

“Someone must have given her an Aiyen Hora- maybe at It’s A Small World. It HAD to be that because I tried everything to stop her crying, and nothing, nothing at all worked. So once I figured it out, I spat at her. And look, it was true, because she stopped crying the second I spat.”

He looked at me with narrowed eyes.

“You are crazy – you know that? Who ever heard of such a thing?”

“Didn’t your mother or grandmother say, “Pooh pooh pooh?” I know you grew up in South Africa, but I am sure they said that, whenever discussing something great or amazing or beautiful about you or your brother or your family, no?”

“Yes. Everyone did. But that was ‘pooh pooh pooh’ – not actual spitting.”

I come from an illustrious line of Hungarian Chassidic Rabbis. I have what my extended family calls a “mixed marriage”, because I am not married to a Chassidic man with a pedigree to match my own. His family is originally from Lithuania. They are serious Jews. They pray on time, follow the letter of law, and believe in fixed destinies. My family rarely prayed on time, as they waited until they felt a ripe moment of connection to speak with G-d. They fudged certain aspects of the law, when needed. If there was any sort of crisis, they fervently employed superstitious practices to influence Fate.

We wore our underwear inside out if we had an important appointment, say, with a doctor. We had red strings from Rachel’s Tomb, spirited out of Israel, worn fastidiously on our wrists. We threw salt with abandon, knocked on tables like woodpeckers, stuck silverware that had fallen on the floor into a flower pot for 24 hours to “cleanse” it from the fall, and placed garlic cloves and camphor in the corners of our bedrooms to confuse evil spirits. And, we spat. Gallons. We were in a constant battle, both with the Evil Eye, and the Yezter Hora, our doubly-named Satan that lived not only in Hell, but insidiously, deep inside us. Both of these forces were very strong, and we needed to conjure equally powerful magic to help us. Spitting was one of the most potent weapons in our arsenal in this perpetual war.

My husband and I spent an uncomfortable night in the tiny bed at the Gaylord. Our daughter slept peacefully straight through the night. He could not get over that I had actually spat on her. And I could not understand what was so awful about spit that he was so horrified.

Hadn’t his mother, like all mothers around the world, used her own spit to clean his face at those emergency moments of childhood filthiness?

Hadn’t he watched movies of baseball players and gamblers and weight lifters, all of whom spat liberally on their hands prior to pitching the ball, throwing the dice or lifting the bar?

Spit is a magical form of fluid. Ancient cultures used spit to ward off all sorts of evil – maybe as a form of anointment. There are stories of those who would spit into the eyes of the blind, healing them and restoring their sight. I’d like to think of all those times my mother and grandmothers used their spit on me, whether to clean me or to take away the Evil Eye, they were giving an intimate piece of themselves, consecrating me with every dab on my face.

Didn’t he realize that all of us swam in a pool of amniotic fluid, made from and by our mother, with a similar consistency and viscosity of her spit? And when moms use their spit on their kids – either as a form of windshield wiper fluid or to take away the Evil Eye – it’s going back to that embryonic time?

I could tell by his confused expression that he had, literally, not a single clue what I was talking about. I sighed, and promised to repent of my backward pagan ways. However, I never once failed to spit on my children if the circumstances warranted it. Of course, I never told him that I continued to do so. And once my grandchildren arrive into this world, they too will receive the holy sacramental water.