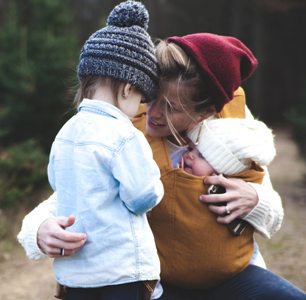 “Imma?” my young son asked innocently. “When a mom and dad hug each other with their clothes off, do they make a baby?”

The first time my son asked me this question, he was only 7 years old. He had heard it from a friend. I remember feeling like one of those cartoon characters—jaw dropping to the floor…rolling down the stairs…and out the door…with my eyes bugging out of their sockets.

After what felt like a 5-hour pause (but in reality, was probably only about 30 seconds), I proceeded to give him a pretty thorough “birds and bees” talk. At age 7. My son. Me.

Sex. Mental health. Mental illness. Death. Pain. Suffering. When exactly IS the right time to address these topics with our children? And what is the connection between all of these seemingly different topics?

The above topics may seem pretty random, but they all tend to be uncomfortable conversations to have—especially with your children. They are issues that often get put on the backburner and conversations that are pushed off until they become blaringly necessary. And that is understandable, as we are often not sure how to speak properly about them, and are afraid of scarring our kids.

Think back to your own childhood, to that moment when you felt your innocence drain out of you. When you realized things aren’t really the way they seem…your first burst bubble…when you can’t unsee, unlearn, or unhear something you were once protected from.

A lot of Jewish communities (and communities at large) have gotten really good at hiding difficult experiences, shoving things under the rug, and making some topics seem bad, even when they are completely normal human experiences. Guilt, shame, overprotection, perfectionism and other related concerns have all become barriers to normal and healthy mental functioning in the Jewish community. There are lots of taboos. In fact, even writing “sex” in a frum magazine could be the delegitimization of that magazine. Will this line get the cut? Will the whole article get cut?

In today’s world, and in my (attempted) emotionally healthy world, I have learned that it’s good to actually lean into discomfort a bit. To discuss difficult topics, and to be ok with not being ok. That it’s all part of being “normal”. Pain is normal.

My husband and I made a pact early on that we would be straight up with our kids as soon as they were old enough to formulate questions on their own. We would use real names for body parts, speak openly and honestly about any topic they could come up with, and explain to our children that there is good and bad in this world, happy and sad, highs and lows, healthy desire and sometimes the need for self-control, and that there is a time and a place for (almost) everything.

It was always important for us to expose our kids to issues on our own terms, in our own way. Firstly, so they don’t spread untruths like “a mom gets pregnant when the dad toasts watermelon seeds and she swallows them” (yes, one of my kids heard that one). Secondly, so they don’t learn from outside exposure and are unable to properly file these experiences in their brains. But mostly, so that we are constantly exercising healthy dialogue. We wanted an open and honest relationship with our children, where they would not feel judged and would always be comfortable talking to us.

Did it work? Not sure, but I hope so…

There are never any guarantees in life.

Every once in a while, I get a glimpse of something that reminds me the importance of open and honest dialogue. My favorite example was 5 years after that first talk of the birds and the bees, when I got a call from my son’s teacher.

“Mrs. Shapiro, I just wanted to let you know that I started teaching your son’s class the 7 Habits of Highly Effective Teens, and I’m so sorry that I didn’t realize on time that there was a chapter on sex. The class got really silly about it, so I was thinking I should abort the lesson plan.”

My heart skipped a beat. And I continued to listen…

“I was so impressed with your son. He came up to me after class and begged me to be patient with the kids. He wanted to make sure that I understood how important it was to discuss the topic with the class, even if they were being immature about it. He was so concerned that if the other kids in the class never had the opportunity to have open and honest discussion about sex, then they would never know that there is so much potential kedusha (holiness) when it’s at the right time.”

I literally cried tears of pride.

Over the years, some really great questions have continued to pop up at young ages. Questions about mental health, about homelessness, about death, and about suffering, among many others.

The issue of “when is the right time to talk to your kids about difficult topics?” is the big question that comes up quite a bit in my work with Margaret’s Legacy, an organization that develops curricular resources to teach young students about the Holocaust in a palatable way.

The Holocaust is another one of those sensitive topics.

I was talking to one of my colleagues recently, Carl Evans, who Margaret’s Legacy and Project Proactive are working with to develop a new program called “A Generation of Hope”. He is a mental health educator at a successful peer-support/suicide prevention non-profit organization called “Hope for the Day”. He shared studies that show that the earlier children are exposed to challenges, coupled with stories of resilience, allowing for healthy dialogue, the more likely they are to develop effective coping strategies as adults.

So, after all of this…when exactly is the right time to discuss these issues with your kids?

Sorry to disappoint you…the right time is something you will have to establish for yourself.

Did you really think I had all of the answers? I’m flattered, but nothing is that easy.

But, what I will say is that for those of you who are skeptical about talking to children early on about sensitive topics, you may want to consider 3 ideas:

Before they learn it “on the streets”, you have the power to control the narrative and give your children the healthy tools they need to build character and resilience, instead of fear and anxiety.