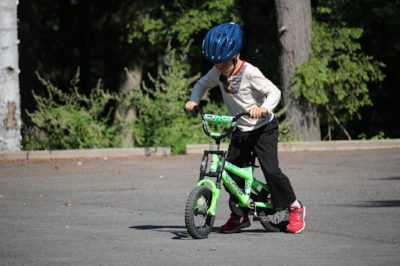 I’m not his friend anymore, he says.

I pause for a moment, surprised. He’s friends with everyone.

I turn him around and fiddle with the strap of his helmet.

What happened? I ask.

I told him if he was mean to Yaakov one more time, I couldn’t be his friend.

He rides through the living room, even though I’ve asked him not to.

Open the door for me, Ima. I’m riding by myself today.

And there he goes, my golden-hearted son. He’s chosen a side and sacrificed a comfortable friendship that provided him with a bike-riding buddy every day, for the sake of his friend.

I marvel at him.

He loves superheroes and cooking shows. He calls himself my sidekick when he peels potatoes and chops vegetables. He’s always saying unexpected things.

This morning he asked me to close my eyes.

I wondered what he was up to now.

Did you hear it?

Unsure of what he meant, I raised an eyebrow.

How did it sound?

I looked at him, as his face scrunched up and he thought about it some more.

Do you think mind readers see your thoughts in pictures? Do they read them? Do they hear your voice? Ima, don’t you wonder what thoughts sound like?

This child is a wonder.

Something settled inside me when he was born. I named him after my uncles. David was my mother’s brother, who overcame his fear of blood to be an EMT. When I was 10, and sliced my knee open, he carried me into the surgeon’s office, brushed my hair off my forehead and told me I’d be ok. Simcha was the third name of my mother’s uncle, who saw the music trapped inside her and gave her an accordion to set it free. David Simcha was what my mother wanted to name her last baby before she found out it was a girl she’d name Yehudis and bury next to her brother, David. My baby brought her comfort seven years too early.

The names flow around him. The strength of David, the joy of Simcha; the ability to see people and feel their hearts runs through his veins.

When he was a toddler, he would give every kid in his playgroup a hug before he left. By the end of the year, it was a daily ritual. I’d arrive ten minutes early. The kids lined up, and he would hug them one by one. Sometimes he forgot about the teacher and would leap out of the stroller halfway home, running back to throw his arms around her too.

Preschool was the same. My son was the most loved, the kindest, the kid everyone wanted a playdate with. That’s when I started to see him more clearly.

He rarely cared for playdates. He liked to come home, strip down to his underwear and cuddle on the couch.

Then he’d tuck his head under my arm and stretch out next to me while we watched his favorite show.

I need to relax. It was a long day.

When friends did come over, I struggled to entertain them while he anxiously tried to suppress his overwhelming feelings.

They are such overwhelming feelings.

He has no regulators, the psychologist told me. He hasn’t found a way to calm down. You need to let him discover a method on his own.

She had me lock myself in my room while he screamed and bit his hand. We leaned against opposite sides of the door and cried.

The tantrums shortened. He called them monsters and gave his feelings colors. He was a ninja who didn’t always win the fight.

He started Tae Kwan Do and trained his ninja to be better.

And I stood by and watched him figure himself out.

I need to distract myself. I play Lego or take a bath. It calms me down. Or I can go bike riding.

He throws his arms around me.

Thanks for buying me a bike.

He tells me about the bullies now.

Today was not so great. The bullies were mean. And they hit! Ima, kids hit at school!

I want names. I want to fix it. I want to scream at these horrible parents. I ask where it hurts.

They never touch me, Ima; they hurt other kids. But Ima, I’m not going to be their friend if they do that! I can’t—I don’t care if they like me!

This child is more than I can ever be.

It hurts him to care so much. I know how hard it is for him, how his eyes fill and his heart aches for so many other people. I see him struggle to be just and true and how navigating through third grade with the moral compass he’s painstakingly built sometimes makes him feel dizzy and unsure.

I told him if he was mean to Yaakov one more time, I couldn’t be his friend.

He is knocking on the door because he wants me to open up so he can ride his bicycle across the living room floor again.

I let him because my heart is full, and I am too choked up with my own overwhelming feelings to care about the mud he drags in with his pure, loving soul.

I made this child, and with him, I have made an actual difference.